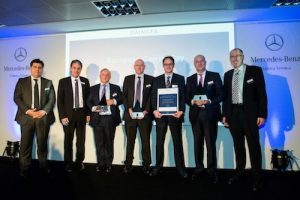 Daimler has announced the winners of its annual European Carrier Awards, which are given each year in recognition of the best performance provided by its outbound services suppliers.

Ernst Frankenbach was singled out for the award in the passenger car segment for what Daimler described as “outstanding performance increases”. The company was previously recognised for its services in the European Carrier Awards in 2002 and 2009.

ECM, meanwhile, also made it a third win with Daimler, having previously won the European Carrier Award for the passenger car segment in 201, as well as being given a special award last year for overall performance in 2013.

In addition, Horst Mosolf, logistics entrepreneur and eponymous head of one of Daimler’s longest standing logistics providers, was honoured with a lifetime achievement award. The German company has provided services to Daimler for more than 50 years and has been recognised five times in the passenger car segment.

"Transport logistics are one of the key levers for our success – without them, no vehicle would get from the factory to the customer,” said Heiko Gaiser, head of global transport logistics at Daimler. “The performance of our transportation partners is therefore very important to us. Together, we are continuously working on making our global vehicle transports even more efficient and flexible."

The awards are part of Daimler’s European Carrier Day, which this year was held at the Mercedes-Benz van production facility in Vitoria, Spain. Around 100 European transport logistics providers attended the event to discuss current industry trends and challenges facing the industry.