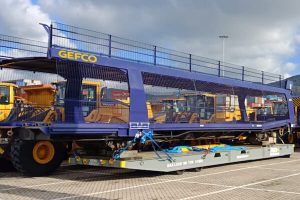 Transport and logistics provider Gefco has delivered two vehicle-carrying rail wagons to serve Groupe PSA’s new car assembly plant at Kenitra, in Morocco. A further 45 will be delivered by the end of this year.

Gefco said the complex operation involved routing wagons from Saint Nazaire port in France, refurbishing and customising them, loading them onto a ship and delivering them to the port of Tangier.

The wagons will be used to carry new vehicles on the railway linking Kenitra with Tangier, before they are exported to Europe. The Moroccan National Railways Office (ONCF) will operate the wagons.

Production at the Kenitra factory is expected to reach 100,000 vehicles this year and then 200,000 from 2020 onwards, according to Gefco, which said that PSA planned to make Kenitra an industrial hub. It has already started developing a dedicated network.

“This project [with PSA] will also further reinforce Gefco’s position in Morocco,” the logistics provider said. Last year it acquired GLT, a Europe-Morocco transport specialist and a leading operator of the gateway between Algeciras in Spain and Tangier.