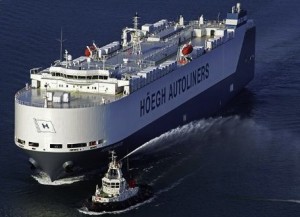 The vessels, which were built in 2010, have capacity for 4,900 car units each and will be delivered in the second quarter of this year.

Ocean Yield has paid a total of around $90m for the vessels and Höegh, which currently operates 60 PCTCs, will have the option to buy the vessels during the charter after the first five years.

"We are pleased to announce our third transaction with Höegh Autoliners, which is considered to be a leading company in the market for deep sea car transportation,” said Ocean Yield CEO Lars Solbakken. “Including the transaction announced earlier today, our EBITDA charter backlog has now passed $2 billion."

The latest charter Höegh has made with Ocean Yield follows the delivery of a 6,500-unit capacity vessel at the end of April on a 12-year charter. That vessel, Höegh Jacksonville was built by Daewoo-Mangalia Heavy Industries, based in Romania.

In addition, the company has ordered six Post-Panamax vessels for delivery between 2015-2016. Based on the New Horizon design they will be the world's largest PCTC with a carrying capacity of 8,500 car equivalent units. The vessels are being built by Xiamen Shipbuilding Industries in China.