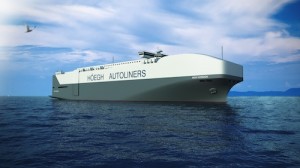 Norwegian car carrier Höegh Autoliners has officially opened an office in Mexico City in a move designed to build on its established import/export trade in the country and take advantage of the opportunities for business that the growing automotive production in the country offers.

According to Per Folkesson, president of Region Americas at Höegh Autoliners, speaking at the opening on January 26th in the Polanco district of Mexico City, last year Höegh handled 170,000 vehicles in and out of Mexico, a significant portion of the 2m vehicles that it handles on an annual basis. The shipping line makes between 80-100 port calls on four inbound and four outbound trades for Mexico.

“We are now looking at an opportunity to expand our service offering in Mexico and, clearly, with the growth in production there will be plenty of opportunities to do this,” said Folkesson. “Therefore, we decided last year to open an office in Mexico and put some of our own people on the ground because that is the best way to control what we are doing and ensure we are going to have the best possible success in growing our business.”

The office in Mexico is headed by Tomasz Karol Lis, head of Region Latin America.

Along with Mexico’s continued export growth, including potential for short-sea trade to the US, Höegh is  targeting trade lanes in and out of the country to other emerging markets, including potential exports to Central and South America. The company has also built up its infrastructure and resources in Thailand and India over the last few years specifically to capture growth in those markets. In one example, it is handling a substantial volume of the recently begun exports of a major US carmaker from India, for which the majority of initial volume will go to Mexico.

“The automotive industry has developed greatly over the last years,” said Folkesson. “It is undergoing changes in the production, with the emergence of new and semi-new export markets, like Thailand, India and now Mexico; this represents a very interesting time for the industry.”

Merethe Nergaard, Norway’s ambassador to Mexico, also pointed to the growing economic opportunities in Mexico for foreign investment, especially for services like shipping and logistics. She pointed to the strengths of the Norwegian shipping industry, in which companies like Höegh could bring expertise and skills to Mexican services, while also pointing to Norwegian technology in improving shipping fuel cell and energy efficiency. With Mexico’s current reform and opening up of its energy sector, there is also interest from Norway’s petroleum and energy companies to do more in the country.

“That is why we are currently updating Norway’s Free Trade Agreement with Mexico, which has been in place since 2001,” said Nergaard

Fleet growth and diversification
The growth in emerging markets such as Mexico alongside the more established ones has led to a degree of fragmentation in previously busy lanes. The consequence for car carriers such as Höegh is that volumes now need to be found on legs that were previously at capacity.

Höegh’s response will be to diversify the sort of cargo it carries. “So far about 90% of what we ship today is vehicles, or light buses and trucks,” said Folkesson. “But we want to start loading more project cargo. That is extremely important for us to stay competitive.”

To do this, and make the most of economies of scale, the company has invested in six new post-Panamax vessels, termed Höegh’s ‘New Horizon’ class. Each will have the capacity for 8,500 car equivalent units, making them the largest pure car and truck carriers (PCTCs), but they will also be equipped with heavy lifting equipment and a ramp capacity of 375 tonnes to carry a wide range of project cargo. “That is very important for us going forward because we need to diversify our cargo mix,” added Folkesson.

The first two of Höegh’s Horizon class vessels are being delivered in the middle of this year, with four more to follow in 2016. These will add to Höegh’s existing fleet of 60 PCTCs.