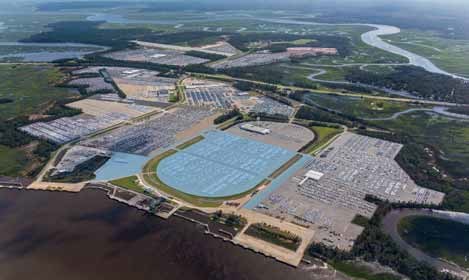 • Over the past decade, the Port of Brunswick has achieved a compound annual growth rate of 9.1% in import and export tonnage, faster than any other US autoport

The Georgia Ports Authority (GPA) Brunswick/ Savannah RO-RO facilities are the second busiest in the US. The Colonel’s Island Autoport in Brunswick, Georgia is a dedicated RO-RO facility without container competition. The terminal offers three modern RO-RO berths as well as two on-terminal auto processors and two OEMs doing their own processing. This focus has resulted in a customer base of over 20 automotive manufacturers, and over 40 industrial/construction and agricultural equipment manufacturers. Nine steamship lines call on the autoport.

Brunswick is also a strategic gateway to rail and road networks. It offers the most efficient, reliable transportation to markets across the US Southeast and Midwest, including those with the fastest- growing populations and capital investments.

Over the next 12 months, GPA will add 60 dockside acres to the RO-RO operation. The new space will increase car storage by 8,250 spaces. GPA also plans to add a new cross-terminal road linking the three vessel berths, as well as a new access road between the docks and the island’s south side. These improvements will offer a more direct route to existing auto processing lots and new development on the south end of the terminal.

The new dockside expansion will also double GPA’s rail capacity and give Brunswick the ability to build up 10,000-foot long unit trains on terminal. These longer trains make direct service over greater distances more attractive to Brunswick’s Class I rail roads, CSX and Norfolk Southern. This will allow the Port of Brunswick to expand service in markets west of the Mississippi River. Vehicles crossing the Brunswick docks are already moving west in significant numbers on rail, with 16,000 units sent to California from Brunswick and more than 4,500 to Texas during FY2018.

Interstate access from Colonel’s Island terminal includes I-95 north-south, two miles away, and connecting to both I-16 and I-10 east-west. Rail services are provided by class one providers Norfolk Southern and CSX Transportation via the Golden Isles Terminal Rail Road. This road and rail network puts important inland markets within easy reach. The terminal enables OEMs to move import, export and domestic vehicles through the same facility, creating better efficiencies.

In addition to its current, world-class service, the Georgia Ports Authority is positioned to move forward with manufacturers and auto processors as they expand. The long-term plan for Colonel’s Island’s south side will eventually add 558 acres (226 hectares) in GPA-owned land to the auto processing operation.

No other major US autoport besides Brunswick has the flexibility to double the size of its current RO-RO operation.

Brunswick’s diverse carrier fleet, superior location and ample space provide GPA’s automotive clients with a vital link to global markets. These strategic advantages have enabled the port to elevate its status as an east coast port of choice for RO-RO cargo.