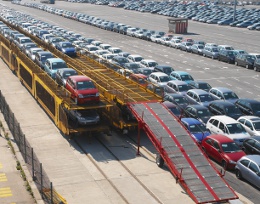 United European Car Carriers (UECC) has incorporated the port of Gioia Tauro in southern Italy with its North to South ro-ro liner service, which will offer transshipment connections from ports in northern Europe to growing automotive markets in North Africa.

UECC’s new service will move cars, vans and high-and-heavy cargo from the port of Bremerhaven in Germany, Zeebrugge in Belgium, Portbury in the UK, the Spanish ports of Vigo and Tarragona as well as Livorno, Italy to Gioia Tuaro, where they can be linked to to Libya, Tunisia and Algeria. The service to Mirsurata in Libya will be twice per month, to Djen Djen, Algeria three times per month, while it will move once a month to Tunis, Tunisia.

Customers are offered the service every other week from August, 2013, and will utilise five large pure car and truck carriers.

(See here for other news released this week by UECC regarding the re-introduction of ro-ro services in Turkey and Russia.)