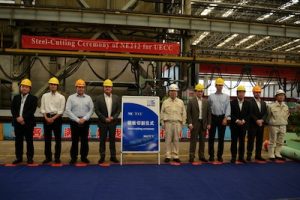 Following the announcement in March last year that UECC was investing in two pure car and truck carriers (PCTCs) capable of being powered by liquefied natural gas (LNG), the company has held a formal steel cutting ceremony for the first of the two vessels at the NACKS shipyard in Nantong, China, where they are being built.

The contract for the dual fuel vessels, which can also run on heavy fuel or marine gas oil, has been signed with Kawasaki Heavy Industries (KHI). Delivery of the first vessel is set for the third quarter of 2016, with the second following by the end of that year. They have been jointly developed with KHI, UECC, Wallenius Marine and NYK Technical Group.

“This steel cutting ceremony marks a s very special moment of pride, joy and emotion for all personnel at UECC, both on land as well as sea,” said Glenn Edvardsen, CEO of UECC, at the ceremony. “I have no doubt that this day will be seen as a significant milestone in UECC’s history.”

Evardsen was joined at the ceremony by Peter Anderson, UECC new building project manager, and Thomas Thue, chief financial officer at the company. Amongst the others present were NACKS presidents, Han Chengmin and Masanori Mizuno, and Takashi Yonesawa from the planning team of NYK’s Technical Group.

UECC said the next milestone is the keel laying, which will take place close to the end of this year.

The move by UECC to commission the LNG duel fuel vessels came ahead of European regulations introduced at the beginning of this year restricting the sulphur content of bunker fuel to 0.1% in the Baltic and North Seas, and the English Channel. UECC has high exposure to the ruling given the amount of time its vessels spend in those waters. Since then, however, the drop in crude oil prices has led to a drop in the price of bunker which has made the impact of the more expensive fuel less severe.

However, the reduction in fuel prices does not affect UECC's future investment in alternatives such as LNG according to its head of sales and marketing, Bjorn Svenningsen.

"We have build vessels for 25 years plus, and a lot of parameters will change during such a long time period," he said. "Furthermore, we do believe that future environmental rules and regulations will become even more stringent than today.  We also believe that LNG will most likely comply with all these future new rules and regulations and as such we still are of the opinion that LNG is the best marine fuel in the long run for UECC."