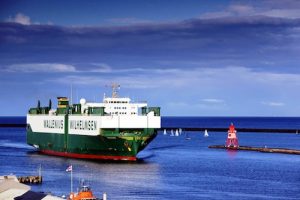 Wallenius Wilhelmsen Logistics (WWL) has made a trial shipment of 15 excavator units to the port of Tyne on the UK’s northeast coast. The equipment, moved for an undisclosed but established WWL customer, was brought aboard the MV Tristan from various ports in Asia as part of WWL’s Abnormal Loads Service (ALS). The company said that while Tyne is not a regular port of call continued demand for the service offered the potential for a more regular service.

“This has been introduced to meet the demands of plant and heavy equipment manufacturers who wish to move their cargo via the port and brings added connectivity to the port of Tyne with a new ro-ro service to our portfolio,” said Steven Harrison, port of Tyne’s COO. “In addition, it shows future possibilities of WWL providing flexibility and solutions for companies wishing to trade directly from the North East to various overseas markets.”

A spokesperson for the company said there would be probably another trail shipment for the customer in question and that there was interest from other customers regarding calls at the port of Tyne.

WWL ALS is also able to handle inland distribution of the equipment to the UK and Ireland.

The port of Tyne already handles regular exports of high and heavy equipment for JBC and Komatsu, based at nearby Birtley in Gateshead. It is one of the UK’s top vehicle ports, and the sixth largest in Europe, operating three car terminals: Tyne Distribution Centre on the north side of the river Tyne, Tyne Car Terminal on the south side and the Höegh Northern Terminal. Customers include Nissan and Volkswagen.

The port also regularly handles steel slabs, steel coils as well as scarp and a variety of dry bulk cargos, in addition to providing services at its container terminal and logistics division.