A simple approach to damage prevention

The fight against damage is fought on many fronts, from protective products to sophisticated data tracking systems. But a focus on staff training and continuous improvement cannot be substituted, writes Piotr Switalski.

When it comes to damage prevention and response, some of the most important approaches are often protection technology–including wraps, covers, sprays, etc–as well as data capture, which identifies the place and causes of damage, and finally smart repair methods that can swiftly and inexpensively eliminate many of the incidents. However, Steve Spicer, who heads up vehicle logistics quality assurance at Glovis America, the logistics arm of the Hyundai-Kia group, believes that outbound logistics providers should not forget the basics; he’d like to see continued investment in staff.

“Our vendors know this can be a very high cost to them, and so it is in their own interest to maintain a lower damage frequency by investing in more training for their staff,” he says. During the recession, however, most companies saw declining volumes and were forced to shed staff. Now, with some recovery underway in North America and parts of Europe, bringing back employees with the same level of quality can be a challenge. “The risk of losing knowledgeable and experienced people is high,” says Norman Van Der Werff, manager at Tokio Marine Europe. “However we maintain our know-how by dispatching teams to areas in need of re-training.” 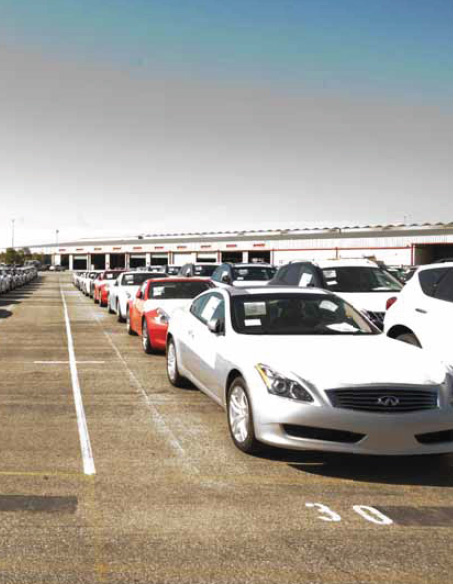 Other providers, such as carriers using union drivers including the Teamsters in the US, often rely on a pool of employees whose experience is high and whose skill levels are often maintained by mandatory training. Smart companies may also have used the downturn to improve process implementation or phase out older equipment. An obvious example has been for ro-ro shipping, which has seen a large proportion of older vessels recycled.

Training is the best defence
However, as Willem de Lange, managing director at TES Automotive and Claims Management Services indicates, equipment is no replacement for the quality of staff operating it. “It is always easier to blame damage on the design of equipment, but in my opinion, 90% of the time it depends on the attitude of the person handling the vehicle. When it comes to older vessels, it is the same as with road traffic–if you can ask people to slow down, they will adjust a little, but when they see the route is clear and think they can oversee everything and there is less risk involved, they automatically speed up.” Likewise, De Lange believes that protective products could have a similar effect, as a driver might be less careful if he believes the car is protected. “And when there is no foam on the door, he has to be more careful himself.” Vincente Valenciano, business manager for Spain at CAT, cites “the human factor” as the most crucial element when it comes to repair tools and processes. Valenciano would like to see consistency of labour and constant training, especially since cars evolve and brands differ from each other more and more in the way they are manufactured.

Van Der Werff agrees, while pointing out that the human factor is also the most difficult to influence. “In some countries, workers tend to be more disciplined then in others. There are even regional differences within countries so that one port could have more issues then another.”

One could compare Van Der Werff ’s comments to the classic carrot and stick principle. “It is about getting the different stakeholders on board. If it is a union, then we invite them to loss prevention meetings, showing them pictures, the costs involved and explaining why doing things in certain ways is also to benefit to them. It can be a slow process, but worthwhile in the end,” says Van Der Werff.

Speeding up the claim time
As sales in several European markets have slowed in recent months with the end of car purchase incentives, a larger proportion of vehicles currently being transported already have final customer orders attached to them. This has, in turn, lead to more pressure on repair lead times, which is felt at every point of the outbound logistics chain.

According to Valenciano, cars are staying longer at factory compounds to allow for better stock control. Once a car is sold, 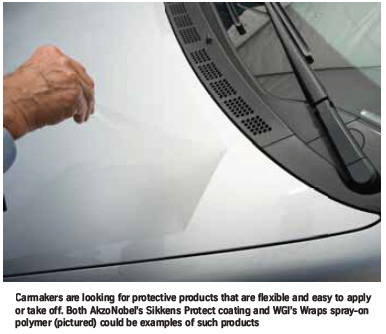 the pressure to deliver it as quickly as possible is higher, as is the pressure on time in the total delay of any necessary repair and transport. “To avoid bottlenecks in the repair and delivery processes we started to spread our technicians across our network of compounds in Europe, deciding sometimes to repair sooner, and sometimes almost at the car’s final destination” he explains. “We also take responsibility of not only the repairs, but also the post-repair delivery when necessary, ensuring as little time loss as possible.”

This need for flexibility is not only visible in the processes but also in the protective products. For example, AkzoNobel’s Sikkens Protect coating can be applied using either rollon or spray-on methods, as well as applying the coating using prefabricated pieces. “The application process options give extra flexibility, as it can be applied at factories, at compounds or even at car dealerships, basically at any point of the transport chain,” says Stefan Wieditz, director of R&D automotive technology at AkzoNobel Car Refinishes. Similarly, WGI Manufacturing offers a product called Wraps, which is a water-based protective coating, applied to the car at the factory and easily removed at dealers or compounds without the need for specialist equipment.

Besides the pressure on lead times, some OEMs and their insurance companies have taken a closer look at improving the claim turnaround times, which had not been a major focus when sales were higher. The benefits are manifold, however. At the point of sale, quicker claim times mean better cash flow. Meanwhile, at the point of production, a more accurate and timely picture of damage-related information leads to more informed decision-making, according to Eduardo Muñoz, general manager of supply chain management at Mitsubishi Motors Europe.

“We manage our claim information in a more timely and accurate way thanks to the commitment of all stakeholders. This enables us to detect quality issues at an earlier stage and make decisions more accurately and customised to the problems detected,” he says.

Muñoz acknowledges that the information collected from the faster claims times is the success of Mitsubishi’s employment of Tokio Marine as the carmaker’s one-stop shop. “Although other OEMs might use different systems or partners, in our case the company that insures us provides us also with all the damage prevention activities. Claim management and information gathering is basically concentrated in one party,” explains Muñoz.

A very similar situation can be seen in America for Nissan, where Tokio Marine is now the OEM’s insurance as well as claims provider. Ben Shain, senior manager of vehicle logistics at Nissan North America, has seen an improvement in claims recovery times. “Some claims that were previously being managed internally were outstanding for as much as a year. Through the use of Tokio Marine, we had been able to better gather, summarise and analyse the data, and over all have been able to reduce the time for outstanding claims to less then 90 days.”

To help speed up the process, dealers are now able to log directly into an internal website to file a claim, versus having to follow a manual process that meant filling out a damage transport claim report, sending it in with the photos, corresponding with the claims agent. “As a result we can now pull the damage statistics directly and almost instantly from that website and get a host of reports, by carrier, by origin or destination,” says Shain.

Van der Werff says this “easy claim” submission system in use by Nissan North America is currently still at a testing stage. “We are looking to roll it out to other markets and OEMs,” he says.

Data capture is the frontline of prevention
Willem de Lange illustrates the need for data capture for all parties to find damage at its root. Traditionally, he explains, the sea voyage was considered the highest risk to car transports based on damage reports. But the main reason was simply because cars have not always been inspected prior to loading, especially for deep-sea operations and cars coming from the Far East. As the first full inspection might not be until the port of discharge, all damages would be considered to have happened at sea. “However, that actually just shows the lack of data and information gathering at various stages,” says de Lange. “Data is the first thing that you need to start any countermeasures in the damage prevention activities.”

Pound Gates Vehicle Management Services, a claims and insurance specialist, considers data as the frontline of damage prevention. “One of the areas we focus with our customers is data capture in the first place and one of the issues we always have to overcome is the varying levels of data that is being captured by the various manufacturers in different places,” explains Matt Holmes, director of the company.

For one client, Pound Gates now co-ordinates the claims activity across Europe, however it is not the claims agent for it across every market. Holmes says that when Pound Gates “inherited” this situation about five years ago, some markets had sophisticated data capture systems while others had none whatsoever. There was no appropriate vehicle for them to share the data across the whole of Europe.

“What we have done is to bring into place a system whereby all of the claims agents, across all of the national sales companies, have to report all of their damage statistics on a monthly basis,” says Holmes.

As a result Pound Gates has been able to bring down the damage rates from about 3.5% to about 2.8% in the last year alone and expects it to go down even more.

Let’s talk about damage
The above example illustrates the advantage of not only data capture but also of better communication between all parties involved. De Lange explains: “When relevant parties communicate, there follows an improvement in damage rates. In this regard we also want to be a sort of liaison for this improved communication.”

Communication between various parties in the outbound chain not only limits the damage ratio by preventing it from occurring, but also increases the efficiency of repairs. However, some damage repair specialists feel that their services are currently used only as a last resort, and there is not enough emphasis from OEMs on ways to improve the process of prevention or repair. Ballsystem, a hail repair specialist, even goes as far as to suggest that carmakers should consider employing in-house experts on things such as hail damage, so that they might better understand the process, and help to build the relationship.

“We believe that it is very important for our relationships that OEMs have internal staff that understand hail damage repair techniques,” says Antonello Fiorenza, strategy director at Ballsystem. “We have been putting a lot of passion into what we do, but sometimes the OEMs do not understand or accept these new techniques, as they believe they are very limited to hail damage repair. We would very much like to see the spread of this technique beyond emergency cases.”

Just a simple premise that goes a long way
De Lange believes that the most important factor in damage prevention is continuous improvement among staff. “Damage prevention is not revolution, it is evolution,” he says. Damage remains an area in which many OEMs–and even logistics providers– are somewhat reluctant to share information, not least owing to the sensitive nature of customer and brand perceptions, according to Valenciano. But the industry would clearly benefit from more transparency. Most fundamentally, damage prevention is a product of continuing training and evaluation, and must be constantly reinforced in the supply chain. It is a simple enough premise, yet it could hardly be emphasised enough.