A star still on the rise in Brazil 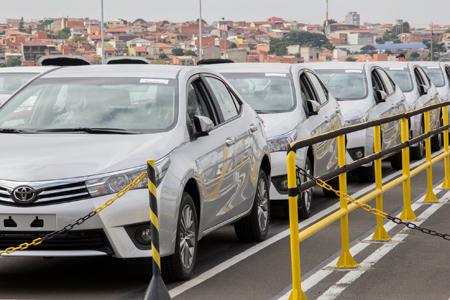 Toyota is a fast-growing player in the huge but difficult Brazilian market. Growth has helped the carmaker apply more lean logistics principles to its vehicle distribution.

The inclusion of Brazil in the BRIC group of emerging nations more than a decade ago put the country of more than 200m inhabitants in sharp focus for all industries, including automotive. Its performance during the financial crisis was also impressive, with car sales rising even as major markets fell.

Brazil is now the fifth largest country for new vehicle sales around the world, but in recent years, the country’s star has dimmed somewhat. Economic performance has been sluggish, including slow growth for vehicle sales (although last year it grew helped in part by incentives). From a regulatory point of view, the country has also at times been protectionist: it increased duties for vehicle imports outside the Mercosur block without local production and has also placed some limits on imported vehicles from Mexico.

The FIFA World Cup this summer put the country back in the spotlight, but has at times represented something of an own goal for Brazil, putting on global display the country’s inequalities and inefficiencies. Protests leading up to the event highlighted issues around infrastructure and poor public transport, for example, while a series of transport and metro strikes coincided with the opening of the tournament. Others grumbled about the timeliness of construction of stadia, hotels and roads. Such delays and strikes have not been news to logistics experts in the country.

Despite such issues, Brazil remains an automotive powerhouse, selling 3.77m new vehicles in 2013 and assembling 3.74m. It could surpass India this year as the sixth largest producer. Carmakers including Fiat, Nissan, Hyundai and Toyota have recently or will soon open new plants.

The challenges for vehicle logistics are both obvious and complex. The country’s huge size and utter lack of viable multimodal options make carmakers reliant on truck transport. The regulatory environment is also considered burdensome, including truck driver restrictions that can impede the efficacy of long-haul trucking (delivery distances are often in excess of 1,500-2,000km). Likewise, port infrastructure is limited, posing bottlenecks both for imports and exports, as well as limiting the potential for any short-sea shipping.

Nonetheless, carmakers continue to grow their distribution activities in the country. One manufacturer that has successfully managed dramatic increases while improving its delivery accuracy and efficiency metrics is Toyota Brazil. Headquartered in Sao Paulo, the carmaker has had operations in the country for several decades, however it recently added a new plant in Sorocaba, 100km west of Sao Paulo. With a site area of 3.7m sq.m, the Sorocaba plant is more than twice as large as Toyota’s other assembly plant in Indaiatuba, and it offers even greater expansion opportunities. 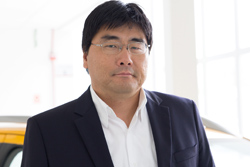 Although it has a long presence in the market, Toyota is not yet among the major players in Brazil; last year it distributed nearly 175,000 finished vehicles, well behind market leaders like Fiat, GM, Volkswagen and Ford, which each sold 500,000-600,000 vehicles in Brazil. However, Toyota’s growth is in line with its niche focus in many emerging markets worldwide, says Celso Simomura, director of production and logistics control at Toyota Brazil. He says that speeding up vehicle deliveries from plants and import distribution centres is paramount to the success of its business.

Simomura attributes Toyota Brazil’s high growth level to the investments in the new plant and launch of the Etios, but the Sorocaba plant has not only added volume; increasing the carmaker’s output has helped Toyota to better implement the principles of the Toyota Production System and lean logistics across its operations, including vehicle distribution.[sam_ad id=6 codes='true']

“Our philosophy combines production management that is focused on customer satisfaction and a culture of continuous improvement. All of Toyota Brazil’s activities and initiatives take into account this fundamental premise,” says Simomura.

Toyota Brazil distributes vehicles from its two assembly plants, both in Sao Paulo state. The carmaker’s Indaiatuba plant, 100km northwest of Sao Paulo, builds about 55,000 Corolla models annually for Toyota’s 142 dealerships throughout Brazil. From the Sorocaba plant, the company delivers about 60,000 units of its Etios model each year. Toyota has a parts production plant in Sao Bernardo do Campo, also in Sao Paulo, and is building an engine plant to increase localisation.

Along with its 115,000 units of domestic production, Toyota Brazil distributes imports from the Mercosur region, in particular from Argentina. According to Simomura, Toyota imports around 55,000 units of Hilux pick-up trucks and SW4 SUVs per year from Argentina by truck, using Rio Grande dry port, located about 225km south of its distribution centre in Guaiba city, in the southern state of Rio Grande do Sul, near Porto Alegre. 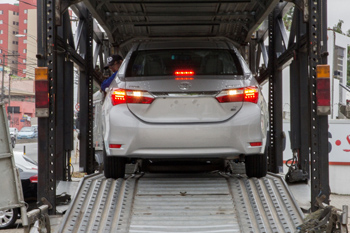 Toyota distributes vehicles from a facility located at the port of Vitoria, which is its hub for Japanese imports, including the RAV4, Prius and Camry. Toyota’s terminal in Vitoria, about 750km northeast of Sao Paulo in Epirito Santo state, handles about 9,000 units annually, including Lexus models, sales of which recently launched in Brazil.

While Toyota is not yet exporting from Brazil, in the past company has said it could use production here to target Mercosur markets.

Although Toyota’s vehicle distribution has been growing to all of Brazil’s regions, one of the best growth examples is the northeast, including the regions around Salvador and Recife. While the northeast has historically been poorer, it has a huge growth opportunity as its population of more than 53m people becomes wealthier. “The northeast region has been experiencing a high degree of economic expansion,” says Simomura. “It is an investment target because of its size and low tax rates.”

As with other carmakers in Brazil, Toyota depends entirely on roadways for transporting all of its finished vehicles. “Road is still the best mode of transport because of its enhanced network as well as Brazil’s regulation of its road system,” says Simomura, although he also acknowledges many challenges in road infrastructure and driving laws.

Although a large share of Brazilian vehicle sales are in the Sao Paulo region, the average trucking distance to dealerships is huge, particularly since Toyota calculates the transport distance from Brazilian and Argentine plants. According to Simomura, trucks might move as much as 500-600km per day.

Each vehicle model presents a different average distance taking into account the localisation factor, demand behaviour and load capacity. For example, the average distance for the Etios is about 1,500km; for the Corolla, it is about 1,200km; and for the Hilux, which comes from Argentina, it is about 2,300km. The average transit time from Toyota’s Sorocaba plant and its Indaiatuba plant is about five days, according to Simomura. From Guaiba, the average is seven days.

As a means of improving its logistics efficiency, Toyota Brazil has invested in what Simomura describes as advanced IT. “The goal is to help ensure that the vehicles arrive at our dealerships damage-free,” he explains.

In 2012, Toyota Brazil implemented an IT system that provides vehicle traceability, identification of vacancies in its yard based on billing information, and load building for carriers. As volumes have grown during the past two years, transit times have actually become shorter thanks to a reduction in load consolidation times. “We have been increasing our road transport efficiency mainly due to our production volume increases without the proportional growth of our dealer network,” says Simomura.

He adds that Brazil’s long distances make it more difficult to provide dealerships with accurate delivery times. However, the company is making efforts to improve this. “We are improving our shipment traceability system by implementing kaizen as well as a deeper on-line integration of our GPS trucking systems and our vehicle status system,” he explains. 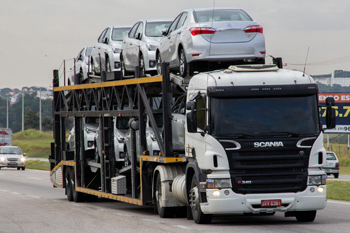 Toyota’s vehicle transport is limited to road in Brazil and South America. The country’s railway networks focus on the export of commodities that link production regions in the countryside with the seaports. By contrast, vehicle assembly plants are located mainly near big cities such as Sao Paulo.

Simomura says that seaport infrastructure and access must improve if Brazil is ever going to shift towards moving vehicles by short sea – a prospect that seems far off today. Current infrastructure can barely handle import and export volumes.

Investments and plans are currently in the works that would involve a general restructuring of Brazil’s port network. The new regulations would include a greater degree of privatisation as well as new laws governing concessions that would promote stronger competition. Such structural changes could be beneficial for finished vehicle logistics, says Simomura. He points to the possibility of streamlining the traffic flow within Brazil’s ports and potentially creating more specialised vehicle terminals. However, the new regulations are complex and controversial and there are some who believe they will squeeze out ro-ro operators further in favour of handling containers or other cargo.

Owing to the country’s size and the distance to some markets, Toyota’s truck provider base is spread out across the country. However, as the delivery distances are so long, managing these operations is complex. To boot, Brazil has a strictly regulated system for driver working times, which forces Toyota to make adjustments, says Simomura. Federal law requires that the maximum workload of drivers shall not exceed eight hours of driving, thus restricting the daily time travelled by these professionals. Driving continuously, without intervals, requires the drivers to rest for 30 minutes for each six hours behind the wheel. The mandatory non-stop rest period that must occur is eight hours.

“We understand that the country is still searching for best conditions for the daily road labour. Moreover, Toyota Brazil defends and follows these requirements. At the same time, although discussions have not yet ended, the lack of clarity in the provisions of this law may have an effect on production location,” states Simomura. 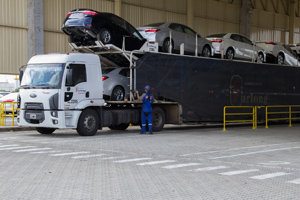 Along with restrictive legislation governing truck drivers, Simomura says that poor road conditions are Toyota Brazil’s main challenge. For example, a chief impediment is the road links from its Guaiba distribution centre, in the southern region, with the rest of the country. “Regis Bittencourt road, which connects Sao Paulo and Curitiba, is popularly known as the ‘Death Highway’ due to the number of accidents that occur. It is one of the most dangerous highways in Brazil,” reveals Simomura. “When an accident occurs, trucks may be at a standstill for up to three days, delaying the transit time.”

Simomura calls for infrastructure improvements on both roads and seaports. To help reach the proper authorities, Toyota Brazil works through Anfavea, the Brazilian carmakers’ association, to create a logistics working team with other OEMs. This team informs the Brazilian authorities of its common interests, such as the need for legislative flexibility.

Toyota faces considerable challenges in Brazil, from a lack of port infrastructure, to moving long distances on congested and sometimes dangerous roads, but Simomura points to effective lean principles and IT systems that have helped to reduce lead time and improve accuracy.

While the Brazilian market may not be a perfect superstar, its potential is still huge. As Toyota aims to increase production and sales here, its vehicle logistics will play an essential role in making sure Toyota scores the right wins and does it in a sustainable way.