Alternative logistics in Africa: The sky's the limit

Africa’s infrastructure gap, which significantly hinders the movement of goods between and within countries on the continent, could soon be substantially filled through the use of aeronautical technology innovations such as drones, airships and remote controlled cargo aircraft.

Moving anything inland from Africa’s coast can be tricky – the flood-ruined roads, the collapsed bridges and the endless checkpoints that levy ‘fees’ on inward bound transporters being just some of the hazards that ramp up transport and logistics costs.

According to the World Bank, the average road density on the continent is 204km of road for every 1,000 sq.km of land, only a quarter of which is paved. This compares to a global average of 944km per 1,000 sq.km of which more than half is paved.

The situation is even more dire when the population is taken into account: only one in three rural Africans has access to an all-season road, and even in areas where there are roads, they are often poorly maintained.

For the automotive industry, this represents a challenge and potentially a hugely missed opportunity. While vehicle sales across the African continent are relatively small today, outside of developed areas in South Africa, north African countries and the Middle East, the continent is expected to see its population explode over the coming decades. According to the United Nations Population Division, Africa’s population is expected to double between now and 2050 from 1.2 billion to 2.4 billion, with the largest increase in Nigeria.

Such prospects are encouraging OEMs to push into these markets. Most recently, Volkswagen Group announced that it would start assembling the Polo Vivo in Thika, near Nairobi, Kenya, from kits from South Africa. China’s BAIC also announced South Africa’s largest automotive investment for decades with a plant in Port Elizabeth to serve Africa. 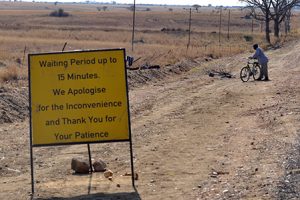 Where roads exist in Africa they are frequently in poor condition. Photo by Gavin du Venage

While a growth in sales would depend on an increase in better roads, the experience of other emerging markets suggests that infrastructure will struggle to keep up with vehicle sales. That will make logistics for vehicles and spare parts incredibly different.

[sta_anchor id="1"]However, the automotive sector may look at other industries for innovations in moving products to customers in Africa. One company that hopes to change the way goods there are moved is US defence and aerospace firm Lockheed Martin, which is developing the P-791 – an airship that will eventually carry up to 500 short tons (just under 454 metric tonnes) of cargo. The craft is similar to the Airlander 10 ‘flying bum’ that was recently tested in the UK, also intended for cargo transport.

“It will land on water, sand, a field – even ice,” says Rob Binns, chief executive officer of Hybrid Airships, the Lockheed unit tasked with the project. Earlier this year, Binns was looking to boost interest in the concept at a Cape Town mining conference, as that industry has long cited the lack of transport as a hindrance to developing mines on the continent. A prototype has already proven itself in Alaska, in the wildest of conditions, he says.

The first commercial airship will be completed in 2018 with a capacity of about 20 tons. Plans are also underway for a model that can lift 90 tons, which would put it in the same category as a cargo-configured Boeing 747. Eventually, a 500-ton model will be built that will compete directly with conventional cargo ships, suggests Binns. In fact, his vision is more bold, perhaps even audacious compared to what is common today.

“It will theoretically be possible to load cars from a factory in central China and, using the earth’s curvature, fly them to the midwestern USA in two days – much quicker and cheaper than first railing or trucking the load to port, shipping across the Pacific, then offloading again for road or rail,” he predicts.

The concept may seem a little eccentric – not least because the airship looks like a cheery character from a Pixar movie. That the Airlander 10 crash-landed on its second test in the UK, albeit with no injuries or major incidents, may not encourage support for such aircraft, either.

"It will theoretically be possible to load cars from a factory in central China and, using the earth’s curvature, fly them to midwestern USA in two days – much quicker and cheaper than first railing or trucking the load to port, shipping across the Pacific, then offloading again for road or rail." - Rob Binns, Lockheed Martin

However, the P-791 has behind it the company that is now developing the F-35, the world’s most advanced fighter aircraft.

“Essentially Lockheed has taken the same technology it is putting into the F-35 and applied it to the problem of moving cargo around quickly and cheaply. The flight control system is basically straight out of the F-35, which will be used to plot a course, navigate and fly,” says Binns.

The airship is helped aloft by helium gas bladders but needs forward momentum to stay airborne. The design of the gas bag emulates that of an aircraft wing, giving lift when its four V-6 diesel motors are running. Still, even if the engines fail, the airship will not hit the ground with much of a bump. “We’ve calculated it will fall at a rate slower than that of a man in a parachute,” Binns says.

“We expect much of the interest to come from Africa,” he continues. “The airship will be able to cross rivers and borders, avoid checkpoints and deliver cargo safely to remote fields that are little more than dirt.”

[sta_anchor id="2"]Drone potentialAnother technology that has already been deployed in Africa is unmanned aerial vehicle (UAV) delivery, better known as the drone. US company Zipline, based in San Francisco, has already begun regular deliveries of medical kits to far-flung clinics in landlocked Rwanda using such technology.

“We’ll be making up to 150 flights a day,” states Zipline spokesman Justin Hamilton. “It means additional cargo needs can be met with additional deliveries. Through this effort, Rwanda has leapfrogged bigger and more technologically advanced countries like the United States and now leads the world in UAV innovation.”

A similar scheme was launched earlier this year by children’s charity Unicef in rural Malawi – a country with no ports and poor road access – to deliver time-sensitive blood samples for HIV testing.

While the aim of these delivery systems is currently humanitarian, they could be applied for commercial purposes. Hamilton says Zipline’s current drone fleet consists of fixed-wing aircraft that carry 1.5kg payloads, but these could be either adapted or used as the model for larger craft to carry equally time-sensitive commercial loads, such as vehicle parts. 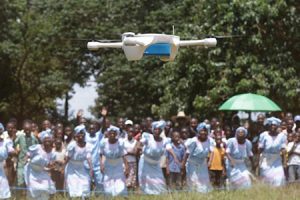 Drones are already being used in parts of Africa for regular deliveries of lightweight loads like medical kits. Photo by Gavin du Venage

Drones are useful because of their small size, cheap cost and the fact they they require no onboard pilot, but there is no reason the same technology could not be applied to larger, conventional cargo aircraft and Kenya-based cargo carrier Astral Airlines is already exploring this option.

“It is likely that Africa will be the largest market in the world for drones, which will be a necessity rather than a luxury,” says Astral chief executive Sanjeev Gadhia.

The company’s research shows cargo drones would add significant value to Astral’s fixed-wing business in Africa, he says, allowing for shipments to be moved to remote locations with otherwise restricted access. Often, what is needed in such locations is not a large aircraft but a small ‘puddle-jumper’ that can carry loads between 500kg and 2,000kg.

Avoiding pilot pitfallsThe big motivation for using remotely controlled drones is that pilots often demand a premium for operating in the less-than-comfortable environments that are common in many parts of Africa. Pilots fly to remote airstrips in the Republic of Congo for instance, knowing that there is no safety equipment on the ground should they have an accident. There is also no telling if the strip is going to be free of people, cattle or wild animals when they get there.

Remotely piloted aircraft, by contrast, can be operated from a centre in Nairobi or Mombasa and cargo flights could become routine. Operators would no longer be in an endless struggle to find pilots for such flights, says Gadhia.

In time, even full-sized cargo aircraft could go pilotless and an international project based at the University of Twente in the Netherlands is looking at just this. Chairman of the Platform Unmanned Cargo Aircraft study, Dr Hans Heerkens, has been giving presentations to aviation operators across Africa promoting autonomous flight.

These would not simply be conventional aircraft with their seats removed, he explains, but planes specially designed exclusively for moving cargo without the extras normally needed to keep pilots alive and comfortable.

Without a crew cabin, pressurisation system and air conditioning, for instance, the aircraft could weigh up to 25% less. It could also be designed differently – Heerkens says such craft might routinely feature a nose that swings up to allow easier access to cargo, for example.

Eventually, the entire fuselage could even be dispensed with. All the lift during flight is provided by the wings, after all, with the body essentially dead weight.

Lack of infrastructure makes cargo transport from the African coast to the interior a real challenge for land-based hauliers. Photo by Gavin du Venage

[sta_anchor id="3"]Plenty of room up aboveIn a way, Africa’s current technology deficit is a huge advantage, Heerkens says. Its emptier skies, in particular, mean the continent does not have the same regulatory hurdles that are currently complicating the deployment of pilotless aircraft across the US, Europe and elsewhere.

What is needed to make unmanned cargo flights a reality, Heerkens suggests, is for operators and aerospace manufacturers to support the design and construction of an entirely new-generation of pilotless aircraft. That will kick a new supply chain into gear.

“The aircraft companies want firm orders before building autonomous cargo carriers; the carriers first want to see what they will look like; and regulators are waiting for them to begin flying to see what the rules should be,” Heerkens says. “As soon as someone makes the first move, though, it will move very quickly and we’ll see aircraft without pilots across the African skies.”