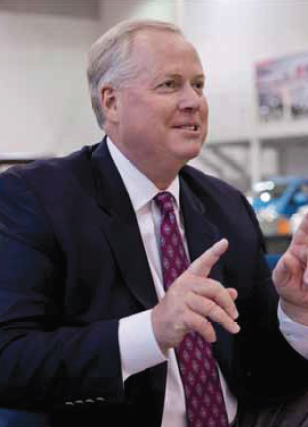 In today’s North American vehicle logistics market, the issue keeping most supply chain managers awake at night is the anticipated growth of exports out of Mexico. Carmakers have announced plans to add around 1.5m units of new production capacity in the country by 2016, which could see exports rise considerably from 2.4m vehicles in 2012 to totals that would rival South Korea and Japan as the second highest exporter of passenger cars after Germany.

Honda’s Celaya plant will begin producing the Fit (Jazz outside North America) in 2014 and will soon after add a compact SUV based on the Fit platform.

Their plan is notable for its impressive variability. It will use regular rail and short sea services, as well as multiple exit and entry points, giving Honda the flexibility to switch locations or modes if necessary. “Flexibility is the name of the game,” says Manns. “We wanted to make sure that, should we have a disruption on one mode or route, we could shift to other options without too much strain.”

Before exploring the plan for the Celaya plant, it is worth recalling how it will fit into Honda’s current production and distribution network. Around 80% of American Honda’s outbound mileage is covered by rail. It also has a fleet of around 400 Auto-Max rail wagons, which offer increased capacity and flexibility compared to normal multi-level wagons.

American Honda currently uses three ports of entry to the US, all on the west coast: San Diego and Richmond, California, and Portland, Oregon. Honda Canada also uses the port of Vancouver. Exports from the US (which are not handled by Manns and his team) are shipped across a more varied port network, including Port Hueneme, California; Jacksonville and Miami, Florida; Brunswick, Georgia; Baltimore, Maryland and Newark, New Jersey. In 2012, Honda more than doubled US exports from the previous year to around 100,000 units.

Drawing Honda’s planned export routes from Celaya on a map (see below) demonstrates the impressive range of territory they cover, with both amphibious and land entry points at no fewer than eight US locations. Honda will use rail and short-sea shipping partly because of infrastructure and capacity uncertainties, but also in spite of them.

In designing a new export flow for Celaya, Honda wanted to ensure it had as many options available as possible, whether in the face of capacity shortages or weather-related disruptions. Considering Celaya will be the sole production location for the compact SUV, inventory availability is going to be critical. The combination of both rail and short sea is a counterbalance to disruption or strains on either mode, as well as to gaining better service and reach.

Even if Honda has fewer than 31 choices, this flexibility could prove important as soon as production begins. For example, Manns points out that an interchange between KCSM and FXE is right in the middle of Celaya, which slows rail traffic considerably. There are currently plans for a major rail bypass to move the interchange outside the city. However, there are concerns over whether the project, which is funded by the Mexican federal government, will be completed in time for Honda’s plant opening.

As well as making the best use of resources and competition in the market, Manns emphasises the need to make these flows profitable for logistics providers. While Honda will split its exports across two railways and short-sea shipping, it w ill also use rail for inland carriage from the factory to the ports, in part to give the railways more volume. Manns recognises that Honda needed to make certain commitments over the coming years that would allow logistics partners to make the necessary asset investments. “We do take a lot of time and effort in our vendor selection process. You can always go cheap, but I’d rather make a good spin first and sleep better at night,” he says. “Whether rail, short sea or processing, we’re in it for the long run to minimise the service disruptions. We hope not to have to make a change during the contract term.”

As the Mexican plant ramps up production and exports, Honda’s vehicle flows will move along a truly continental axis, with hundreds of thousands of vehicles exchanged between the US, Canada and Mexico. This cross-shipping requires more central coordination of all three countries’ operations. While there are no formal plans to integrate the logistics management of the business units, in practice American Honda is taking a lead on managing these flows.

The growth of Honda’s exports and imports from all corners of North America represent nothing short of the Japanese OEM’s transformation to having a fully fledged continental network in North America. Indeed, only GM, Ford and Chrysler will have such extensive cross-shipping routes and modes across all three countries, which is perhaps why Honda is looking more carefully at managing logistics on a North American basis that would more closely resemble the structures of the Detroit carmakers (although others, such as Nissan, have something similar in place, while Daimler too has been exploring such integration).