Although Europe is considered to be a single market, differing laws and regulations surrounding wages, truck dimensions and weights are making it increasingly difficult for finished vehicle logistics providers.

In the face of growing divisions between transport regulations in various European countries, finished vehicle logistics executives and European officials have expressed concern that the EU is drifting further away from its single market objectives. Speaking at a dinner debate organised in Brussels by the Association of European Vehicle Logistics (ECG), speakers pointed to issues such as wage regulation and truck weights and dimensions as increasingly divisive issues threatening both efficiency and fair competition.

Among the most contentious issues this year, for example, has been Germany’s new minimum wage law, which came into effect January 1st, and has drawn protests and legal appeals from trucking companies, particularly in eastern Europe. For a number of finished vehicle logistics providers, however, the difficulties are less about paying the €8.50 ($9) per hour, and more in managing complex paperwork and administration, which is very confusing, according to Jörg Mosolf, the chief executive officer of German vehicle logistics provider, Mosolf Group. 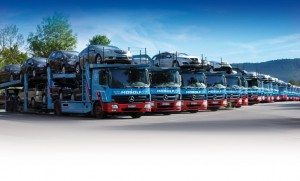 Jörg Mosolf complained that the law requires paperwork to be filed with German authorities well in advance of logistics operations.
Indeed, some trucking companies, including those from neighbouring countries in the Netherlands or Belgium where higher minimum wages already exist, the law has been welcome in principle, if not criticised for its application.

The German minimum wage is notable for the trucking sector because the German government has insisted that the payment is applicable to any worker operating on its territory, including truck drivers carrying out deliveries or pickups in Germany, as well as companies moving in transit across the country.

Trucking companies in countries such as Poland and Hungary have launched complaints and lawsuits against the law, which forces them to pay wages considerably higher than the minimum wage or average salaries in those countries. Earlier this week, for example, Polish truck drivers carried out protests in various locations across Poland, including blocking cargo terminals and motorways.

In January, Germany suspended application of the minimum wage for transit operations only while the European Commission examines the law’s legality. The law is still applicable for any company with destinations or origins within Germany. The German government has maintained that it believes the minimum wage requirement for transit to be legal under European law. A decision on transit operations is expected later this spring.

“Nobody understands”
For many companies in Germany and its neighbours in western Europe, however, the onerous paperwork associated with the minimum wage law is a serious challenge to their business. Jörg Mosolf complained that the law required paperwork to be filed with German authorities well in advance of the logistics operations. Not only is the timing around such filing difficult in an industry that does not always have a long lead-time ahead of specific transport operations, but the filing had to be done only in German, often to different customs or border authorities, and, perhaps most backwards, only by fax machine.

“Our company does not even own a fax machine, so we have had to go find one to use,” Jon Kuiper, chief executive officer of the Koopman Logistics Group.

“Nobody understands who is exactly responsible for what, or what exactly we are supposed to send to whom. Frankly, it’s very confusing,” said Mosolf, who admitted that he was describing the situation in “polite terms”. He went on to use a much more explicit adjective to describe the administration around the law.

Non-German companies may find it even more difficult to meet the proper requirements for both language and operational reasons. Jon Kuiper, chief executive officer of the Koopman Logistics Group, a Dutch-based vehicle logistics provider that also has a vehicle compound and trucking operations in Germany, admitted that the law would “win no beauty pageants” for its crude application. “Our company does not even own a fax machine, so we have had to go find one to use,” said Kuiper.

However, Kuiper said that, in principle, he was in favour of the German minimum wage and its application to all truck drivers, as it helps make logistics operations more competitive for companies from the Netherlands, which already has minimum wage requirements. He was also in favour of similar plans under discussion in France. Kuiper called on the European Union to take a more harmonised view of transport and wages to prevent what he called “social dumping”, including the use of low-wage trucking companies from eastern countries such as Romania or Poland to carry out operations in other, higher wage countries.

“We need to have a European view of transport, where we can increase harmonisation in the single market, avoid social dumping and have a level playing field,” he said.

China won’t wait
Kuiper’s concerns were more around how the law might block the flow of goods and, in effect, re-erect virtual borders in Germany or other EU member states. That is a sentiment shared in some quarters of the European Parliament. Wim van de Camp, a Dutch MEP who is also the coordinator for the Transport Committee for the European People’s Party (EPP), the largest political bloc in Brussels, agreed that the problem with the German law is in how it is applied for transit workers and truck drivers.

“In general we see the German minimum wage as progress, and the EPP is in favour of it,” he said. “But we have to work out how to handle the practical side of its application.”

Among the issues that the German law raises is the European Commission’s push to reduce paperwork and move transport operations towards electronic invoicing and filing, said van de Camp. With its somewhat archaic requirements for paperwork and fax, however, the German requirements are a step backwards.

Van de Camp is currently overseeing a review of the EU’s transport white paper, first published in 2011, which calls both for a significant reduction in carbon emissions in transport, but also for harmonisation of the European transport industry into a single market, including the removal of cabotage restrictions and unifying social standards. However, van de Camp admitted that the EU was still far away from meeting these objectives, of which the German controversy is not the only example.

Wim van de Camp said disagreements over wages and working standards prevent a more aggressive pursuit of a single market.
Another is the failure of the European Council at the end of last year to agree to harmonise minimum loading lengths at 20.75 metres across the EU (a cause long-championed by ECG), as is already allowed in a number of European countries, including Germany. Despite agreements that passed in the European Parliament and Commission, the Council failed to agree language that satisfied all member states, and the status quo was maintained, which includes a large variety of national standards.

“We find this happens too often. In the EPP Transport Committee, for example, we represent 27 countries, and often the Austrians don’t want our Dutch Eco-combis (25.5 metre trucks) driving in their Alps, while the Deutsche Bahn resists elements of the fourth railway package we are currently working on,” said van de Camp.

He also added that disagreements over wages and working standards prevent a more aggressive pursuit of a single market. “On the social side, the eastern countries are very tough on resisting efforts to increase driver wages in line with western Europe, as it is seen as a competitive advantage.”

In 20-30 years, he said, wages are likely to be more similar across the EU. “But we can’t wait that long. By then, many companies would have gone bankrupt. We have to find ways to work together now, and do it faster,” he said.

Despite the difficulties, van de Camp warned that European countries had more to gain by working together than separately on issues concerning logistics and trade, and he warned against the nationalist and protectionist tendencies that he detected across the EU. “Our major trading partners, like China, won’t wait for 28 countries to come to separate decisions, or for us to find language that pleases everyone.

“The time for open talking and debate is over. We have to act faster.”

Van de Camp invited all stakeholders in transport to contact his office for any suggestions that might be included for consideration in the white paper review.

For more on progress (and setbacks) in pan-European vehicle logistics services, read here.