Analysis: PSA ‘product blitz’ will put the focus on its supply chain 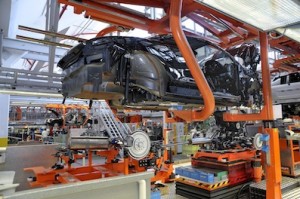 PSA Peugeot-Citroën has announced some big organisational changes recently, both in terms of its group divisions and its approach to customer trends, with some big consequences for its supply chain.

Last week, the company revealed it was switching its corporate identity to PSA Group to take in the DS brand alongside Peugeot and Citroën. It also said it would make a significant shift in its business model towards a broader portfolio of business activities – the ‘Push to Pass’ plan.

The plan for 2016-2021, PSA Group said, would transform the company and meet customers’ needs by anticipating changes in car usage patterns.

Part of PSA’s plan is to unleash a “product blitz” across the Peugeot, Citroën, and DS brands, launching a new car each year, in each region and across each brand. Overall, this plan includes 26 new passenger cars and eight light commercial vehicles by 2021. There will be seven plug-in hybrid vehicles and four battery-electric vehicles joining the line-up.

Research and development spending will be cut by a hefty €1.5 billion during the period and the group is working to cut the average cost of vehicle manufacturing by €700 per unit. PSA is also hoping to improve productivity by 5% a year between 2019 and 2021.

Carlos Tavares, chairman of the PSA board, said: “Based on our financial reconstruction, we will launch a global product and technology offensive. Now more agile, we are ready to shift paradigms by anticipating changes in car usage patterns. Our digital transformation will make the PSA Group a company connected to its customers. With ‘Push to Pass’, we will ensure profitable organic growth.”

Going globalIn Europe, the OEM hopes to be the top brand in the non-premium sector for profitability and just one step behind in market share, it said.

Despite the troubles in the Eurasia region, PSA has no plans to leave the market, and wants to get back to breaking even by 2017 at the latest. There are also plans to hit 700,000 sales a year in the Middle East and Africa by 2021, with 70% of the vehicles sold there locally manufactured. PSA is particularly looking to Iran, Algeria and Morocco.

By 2018, PSA hopes to achieve 1m unit sales in China and South East Asia, a region in which it is set to launch 20 products. And although the company is not currently present in the Indian market, it is apparently looking into potential partnership deals to rectify this.

As PSA is planning to significantly increase the amount of localised manufacturing, a lot of work will have to be done on localising suppliers if the OEM wants to bring down costs as much as it plans. There is also little doubt that the push across the supply chain and its production network will require considerable focus on managing logistics costs and efficiency, a task that the company's primary logistics partner, Gefco – in which it still owns 25% and has an exclusive dedicated contract – will no doubt play a major role.

Back to the US?The ‘Push to Pass’ plan could also see PSA launching Peugeot, Citroën and DS models in the US market, which it has not been present in for over 20 years (though it has had a presence in Mexico more recently).

While Tavares isn’t revealing many details at the moment, any move back to the US is projected to take place in three stages. During a presentation for analysts and investors last week, Tavares said the first step would be to start as a mobility operator from 2017 and to potentially work with Bolloré – a French electric vehicle manufacturer that primarily produces cars for the Autolib car sharing programme. After this, PSA Group would look to develop mobility solutions using PSA cars, as part of a car-sharing programme. If these stages proved successful, the OEM could return to selling vehicles within the US, he said.

PSA’s plans are certainly ambitious, but the US market is a hard one to crack, especially for a brand that is relatively unknown in the country (its current vehicles would also fail to meet US specifications). And the logistics and supply chain implications of setting up somewhere new – whether in stages or otherwise – would be certainly be very considerable and would require a great deal of investment. Gefco, which has offices in Detroit and Mexico City but relatively limited activity in North America, could pave the way to some extent with its own expansion in the region. Its acquisition last year of IJS Global, a freight forwarder, increased some activities in the region, and the company could look further in the US and Mexico. Any supply chain ground network in the region could help PSA later.