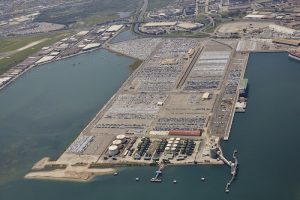 One of the significant conclusions of the report, however, is that the overall grading for port logistics declined because of the strong impact that last year’s strike by stevedores had on the automotive sector. The strike action over labour reforms affected ports across Spain, though vehicle stevedores were exempted from the deregulation.

Some ports were also marked down in the Anfac survey because their facilities were working beyond capacity, while overall it was noted that there was a “need to improve handling during the loading and unloading of vehicles on board vessel to achieve greater compliance with the instructions of the [various] brand[s]”.

One aspect the study identified as being key was good road access to ports.

The study welcomed the proactive nature of the port community, characterising it as being “very positive” when finding solutions and improving the overall customer service on offer.

The study also set out to give a series of recommendations as to how ports could improve their logistics capabilities for the automotive industry. Above all, it said manufacturers want to see more service flexibility and competitive costs. Additionally, they are asking for more training of front line personnel, the adaptation of ports to meet the needs of new alternative vehicles; and moves to improve connectivity of ports vis-a-vis the main rail truck routes used by the industry.

Exports up in JuneFigures compiled by Anfac show that the Spanish automotive industry produced 1.6m vehicles in the first half of 2018, an increase of 4.2% over the corresponding 2017 period. In June alone, the country’s vehicle makers built 278,748 units.

In 2017, the Spanish automotive sector moved close to moving 3.3m vehicles through its ports, which was an increase of 1.2% over 2016.

Eight ports handled around 2.9m vehicles between them: Barcelona, Málaga, Pasajes, Sagunto, Santander, Tarragona, Valencia and Vigo. That amounted to 90% of all Spanish maritime automotive traffic. Of these, Santander, Sagunto and Pasajes were graded highest, being awarded a score of 4.2 out of a possible 5.

Exports in June were up 12.9% at 233,370 units, thanks to strong markets in France, Germany and Eastern Europe, as well as there being something of a recovery in exports to North African countries such as Algeria and Egypt, offsetting declining markets in the UK, Turkey and Italy.