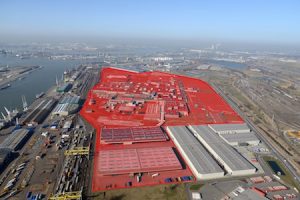 Antwerp Port Authority (APA) is purchasing GM’s Opel plant, which is located close to the port area but which has been closed since the end of 2010 following the carmaker’s restructuring of activity in Europe.

APA said it plans to develop the entire 96-hectare site to attract manufacturing to the complex, which provides advantages for the development of industrial and logistics activities. It did not reveal for how much it was buying the site or how much it would be investing in its development.

The site is located on the right bank of the Scheldt has direct connections with hinterland road, rail and inland waterway networks. The authority said it would be focusing on integrated development.

“The port’s proximity to large centres of production and consumption, its high cargo-handling productivity and its excellent services make Antwerp the ideal location in the commercial and industrial heart of Europe,” said the authority in a statement. It added that it would be issuing invitations for potential investors to submit proposals as soon as possible.

APA said it was looking at the development of the port more widely and was involved in a number of strategic projects including the construction of the Deurganck dock lock, which it said, once completed, would be the largest in the world, further expansion of the port area on the left bank, development of the new Waasland and Schijns logistics parks, and participation in hinterland hubs.

Car production originally began in Antwerp in 1925 when GM established its second plant outside the US there for CKD production of the Chevrolet. In the first year just more than 2,000 vehicles were assembled. That rose to more than 250,000 when the facility was at full capacity in the first decade of this century.

In the first three months of this year Antwerp port recorded a rise in car handling of 2.5%, with throughput growing to just under 313,500 units. Container volume rose once more during the first quarter by 2.1%, to 26,004,571 tonnes.

Later this year, GM will close another Opel factory in Bochum, Germany. It said last year that, to fulfil a contract to Neovia Logistics, it would maintain a logistics centre at the site until 2016.