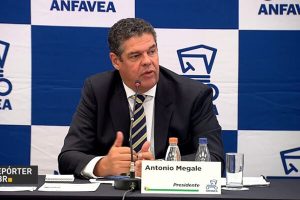 Brazil’s National Association of Automotive Vehicle Manufacturers (Anfavea) has confirmed it is lowering its forecast for automotive exports this year, after warnings that the economic crisis in neighbouring Argentina is impacting on that country’s ability to import finished vehicles.

While total automotive exports will not actually decline this year, they will not grow, warned Anfavea president, Antonio Megale (pictured). Domestic car sales, meanwhile, are projected to rise by 11.7% this year, although there are hints the final figure might exceed this.

Brazil’s Independent Fiscal Institute (IFI) has suggested that the situation in Argentina will negatively impact on Brazil’s GDP this year. This has been backed up by Celso Grisi, professor of foreign trade at the University of São Paulo.

Girsi told the Folha de Sao Paulo news outlet that Brazil’s automotive sector, which normally accounts for around 4% of GDP, would only account for 3.5% this year, but said that while this was not “negligible”, it also was not “tragic”. The main fallout could be in reduced employment in the automotive sector, he suggested.

Argentina, which is one of Brazil's main trading partners, has required IMF assistance this year. It imports 76% of Brazil's light vehicle exports and 46% of its trucks and buses.

In July, light vehicle, HGV and bus exports from Brazil amounted to 64,900 units, a drop of 4.4% compared to July 2017, which Anfavea’s Megale said was a definite sign of a cut in imports by Argentina.

In the first seven months, however, total exports of buses and commercial vehicles from Brazil were up 0.5%. Initial forecasts were that exports would reach 800,000 units this year; this has subsequently been adjusted to 766,000 units, which would still be a record.

The state of the various economies in South America will be among the subjects under the spotlight at the forthcoming Automotive Logistics South America summit, taking place on November 28 in São Paulo