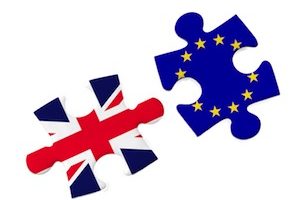 As the UK officially kicked off the two-year process of leaving the European Union today (March 29th), a number of trade bodies, manufacturers and analysts have again issued warnings about the risks that would face the British and European automotive supply chains, should the UK leave without securing full access to the European single market and customs union. or without transitional agreements in place.

In the face of potential tariffs for moving parts and vehicles between the UK and the continent, logistical and customs barriers to freight, as well as divergence in regulatory standards, analysts estimate that the costs to manufacturers would run into the hundreds of millions of pounds – as would the cost to government of attempting to reimburse border taxes and duties. Consumers, meanwhile, could see vehicle prices rises by more than £2,000 ($2,560) per vehicle.

The message from many in the industry, given the uncertainty over future trade terms and the outcome of negotiations, is for the government to secure as much single market access as possible, but also to ensure stability should a final deal with the EU fail by 2019, including by agreeing transitional arrangements.

The EU, for its part, has already indicated a firm line in negotiations, as well as limited time periods for transitional agreements.

In a statement, SMMT referred to Brexit as “perhaps the most significant threat to the competitiveness of the UK automotive sector in a generation”.

“Triggering Article 50 has started a race against time to secure a deal that safeguards the future of the UK automotive industry,” said Mike Hawes, SMMT chief executive. “Government has committed to creating and supporting the right conditions for our industry to be successful. That means certainty in our relationship with our biggest market, tariff-free and open borders so products, parts and investment can flow freely, and continued influence over the regulation that governs the vehicles we build and drive.”

The supply chain is at the heart of the Brexit issue, particularly the impacts that would range between a milder form of Brexit – in which tariffs and customs are avoided – or a ‘hard’ Brexit, with WTO terms, implying not only import and export duties, but also more costly and time consuming customs and border checks.

In a speech earlier this year, prime minister Theresa May said control over immigration and jurisdiction over laws and regulations would take priority over membership of the single market, which allows for unfettered trade in goods, capital and services, as well as free movement of labour. In that speech she also called for a bespoke agreement that would include “maximum access” to the single market, including potential carve outs for trade and customs for sectors like the automotive industry.

By leaving the customs union, the UK would then be able to sign separate free trade agreements with countries outside the EU, terms that Brussels currently negotiates on behalf of the entire EU.

She warned, however, that no deal would be better than a bad deal for the UK, a threat to EU negotiators that Britain would walk away from talks without the right conditions.

Counting the hard costs in the supply chainInfluential business associations and companies have warned strongly against relying on WTO terms, however, pointing to the significant disruption to businesses and supply chains such a change would incur, both in cost and operational terms.

Earlier this week, Britain’s largest manufacturing lobby, the EEF, warned the government that manufacturers would suffer significantly in the event of reverting to WTO terms. “The idea of being able to walk away empty-handed might be a negotiating tactic, but it would in reality deliver a risky and expensive blow,” said Terry Sculoer, chief executive of EEF.

The SMMT also warned that additional tariffs and non-tariff barriers would put UK manufacturers at a competitive disadvantage, and discourage investment. According to SMMT, investment in the UK automotive sector already fell from £2.5 billion ($3.1 billion) in 2015 to £1.66 billion last year.

Of the roughly 3m cars bought in the UK last year, SMMT estimates that 70% came from the rest of the EU. The UK, meanwhile, exported more than half of its 1.3m vehicle exports to the EU. The SMMT has warned that, while it welcomes new trade deals with important automotive markets like the US and China, new agreements would not be able to compensate for losses in the EU, the UK’s largest market.

The SMMT estimates that the 10% tariff stipulated by the WTO would add £1.8 billion to the cost of assembled cars exported from the UK and £2.7 billion for those imported from the EU – raising prices by £1,500 per car. It also pointed to the tens of thousands of parts that cross European borders multiple times in building a finished vehicle, and the importance of protecting this frictionless, ‘just in time’ movement.

PA Consulting calculates that the costs between vehicle tariffs as well as an average of 4.5% tariffs on components could increase costs by as much as £2,372 per car. The consultancy also warned that time delays at borders could impact the sector’s supply chains.

“Both the EU and the UK would benefit from keeping free trade and supply chain unaffected because any tariffs would be damaging for both sides based on today’s complex supply chain arrangement,” said Tim Lawrence, global head of manufacturing at PA Consulting Group.

Last month, in statements to the British parliament’s trade committee, Colin Lawther, Nissan’s senior vice-president for manufacturing, supply chain management and purchasing in Europe, also warned that disruption to the “free flow of parts” would be a big disruption to the carmaker’s factory in Sunderland, the UK’s largest car plant.

Reliance on EuropeA new study by IHS Markit has also revealed the scale of the challenge that would face the automotive component supply chain in the event of harder barriers to trade. The study showed that the UK’s reliance on suppliers in the EU, particularly from central Europe, has increased in recent years, and that the UK lacks the scale on its own to encourage localisation of many types of components and subsystems that are currently imported.

For example, IHS Markit’s assessment of more than 100 critical components representing about 40% of vehicle costs showed that 2016 local content levels for UK-built cars were 34% on average, with some manufacturers sourcing as little as 22-23% from UK-based suppliers.

While some areas of sourcing have increased, notably engine supply (driven by Jaguar Land Rover’s new engine plant), the UK supply base suffers from weakness in a number of commodities and subsystems, according to Matteo Fini, director of supplier solutions at the consultancy.

Such low levels of sourcing are notable in transmission supply – only 1% of UK-built vehicles use locally built transmissions – as well as headlamps, central body control modules, wiring harnesses, steering systems, emission control technologies, among other subsystems.

Even locally manufactured parts often rely on many imported inputs. The UK is Ford’s largest production centre for engines, for example, however its localisation level for engines across its two plants is around 40%.

The majority of automotive components and systems are supplied from the EU. And despite efforts by UK-based manufacturers to increase local supply, EU parts exporters have increased market share. Fini pointed to average growth in EU-sourced parts of 1.3% per year between 2011 and 2015 compared to annual production growth of 1.1%. The EU’s share of imported parts has also grown from 73% in 2011 to 79% in 2015. 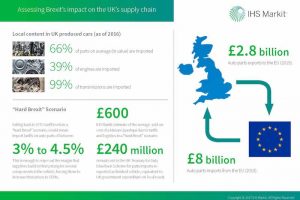 Fini suggested that efforts by carmakers to increase supply localisation have been real, however he notes that more shifts have occurred from long distance sources, such as in Asia, to regional locations across Europe, rather than specifically to the UK. For example, Japan-sourced car parts to the UK fell from £1.4 billion in 2011 to £400m in 2015. However, most of this shift went to central and eastern European countries. One result is that Poland is now likely to have surpassed Italy as the third largest country supplier of parts to the UK, after Germany and France, with more than £500m parts exports per year. German parts exports to the UK have remained stable at around £3 billion per year since 2011.

Fini pointed to the “integration, convenience, and cost effectiveness” of European supply for UK manufacturing as a factor in this stability and growth, including logistics efficiency.

Investment for local sourcingA disruption of this smooth flow in terms of both tariffs and logistics could encourage some manufacturers to increase local sourcing and production in the UK, according to PA’s Lawrence; however, others would also look to shift manufacturing out of the UK and into Europe.

Fini at IHS Markit also pointed to some carmakers that import substantial volumes into the UK to potentially justify investment in assembly, including Volkswagen Group’s 566,000 units in 2016 and PSA’s (combined with Opel/Vauxhall) 466,000.

However, Fini said that the type of investment needed to fill many of the supply gaps in UK domestic production would likely depend on an increase in volume that is highly unlikely in the current climate. For example, the production levels that would potentially trigger investment from a radiator supplier is about 600,000 vehicles per year in the same region, while for a shock absorber supplier it is around 800,000 units. At customer volumes lower than these levels, it is usually more cost efficient for such suppliers to produce in centralised locations. While UK production has risen to 1.7m vehicles, the highest since 1999, Fini suggests that even a 50% jump in output would be unlikely to propel such supplier investments.

IHS Markit also suggested that the cost to the UK government of compensating manufacturers for taxes and duties or cutting taxes would be prohibitively expensive. A corporation tax reduction from 20% to 10% would have cost the UK exchequer £130m in lost tax revenues from JLR alone in 2016. Meanwhile, based on 2015 figures, promoting exports by reimbursing import duties on parts for exported vehicles sourced from the EU would cost the UK £240m per year.

Triggering the transition?The official triggering of Article 50 sets in motion a two-year timetable for the UK to leave the EU. According to the terms of the Lisbon Treaty, the UK must first agree exit terms, including budget obligations, citizens’ existing rights and many other matters, before determining the terms for its future trading relationship with the remaining bloc. Most experts agree that two years is unlikely to be enough time to agree exit and free trade agreements, and that transitional arrangements will need to be in place to avoid going off a ‘cliff edge’, in which the UK and EU would rely on WTO terms.

In response to the scale of potential costs and the complications around Brexit, and government threats to walk away without a deal, there have been repeated calls for a transitional agreement that would protect most of the UK’s current trade terms."Any deal must include securing tariff-free trade with the wider customs union and not just the EU27, whilst retaining access to the best talent and resources," said Jim Farley, president of Ford of Europe, the top seller of vehicles in the UK."It also is critical that a transitional period is put in place to ensure that customers are not penalised and to maintain free trade," Farley said.The SMMT, which ultimately wants to see ‘equivalent single market benefit’, the maintenance of current customs procedures, as well as access to European labour, has also promoted transitional arrangements to avoid disruption.

The UK’s position on such agreements has wavered. While May and others in her cabinet have cited the potential for ‘phased implementation’ of new terms, they have also dismissed any suggestion of a deal that would resemble those in place by the likes of Norway or Switzerland.

In the EU parliament’s first official response to the UK’s Article 50 letter, the parliament said that any transitional agreement could last no longer than three years after the UK leaves the EU.