Gefco was not first to the door in China or south-east Asia, but its regional management believes that it still has great potential to expand. 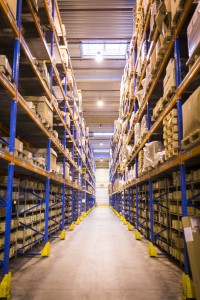 Today, China and Asia barely make up 3% of Gefco’s global turnover, about par with operations in Italy and around ten times smaller than business in France. But with new contracts and plans to expand across south-east Asia, Gefco’s Asian subsidiaries could start powering ahead of European counterparts.

The provider is already planning growth of 50% this year in China, after which Gefco China managing director Andrea Ambrogio believes the company can sustain annual growth rates as high as 20-25% for much of the remaining decade.

Gefco’s confidence is based on contract wins and a growing presence in the wider region. Last year, it won the local distribution of Volkswagen and Skoda vehicles imported through the ports of Shanghai and Tianjin. Regional offices now dot the east coast, adding branches in western cities like Chengdu in 2013 and plans this year for offices in Ningbo and Dalian.
In this story...

Most of Gefco’s Chinese business is handled between two large joint ventures. Dongfeng Gefco, a 51:49 company between Dongfeng’s in-house provider, Hongtai, and Gefco, operates in-plant logistics at two Dongfeng Peugeot-Citroën Automobile (DPCA) plants in Wuhan, and complete knockdown kit (CKD) packaging and shipping. In December 2012, the JV provider took over a regional warehouse for DPCA in Beijing for northern China spare parts distribution. Dongfeng Gefco has around 1,400 employees, including 400 in each of the factories.

A second, 50:50 joint venture was incorporated last year with Minshen Shipping to serve Changan Automotive PSA (CAPSA), which builds the DS line in Shenzhen. With a staff of more than 400, Shenzhen Minsheng Gefco Logistics (SMGL) manages inbound and outbound logistics, while CAPSA operates in-plant logistics itself.

Both JVs have potential given DPCA’s ambitions. With Dongfeng’s recent 14% investment in PSA, the carmakers are expected to build a fourth plant in China, and plan to export more to south-east Asia. CAPSA, meanwhile, will launch a second model this year and may eventually build an SUV.

Gefco is developing a network to serve all of China’s production regions and beyond in Asia. According to Christophe Poitrineau, president of Gefco Asia, the company will open subsidiaries in Thailand, Vietnam and Indonesia. His vision is to develop strong intra-Asia flows, targeting DPCA and other China-based OEMs.

Although Chinese carmakers have struggled to gain an export foothold for vehicles (vehicle exports declined 7.5% last year), Poitrineau believes that will change. “The historic trend will be the growth of Chinese carmakers to foreign markets. That is also national policy in China,” he says. “Gefco wants to serve Chinese OEMs – that is a target.” 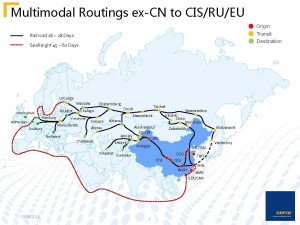 All aboard the Trans-Siberian

The other area in which Gefco wants to grow its international business with China is regular railway services between Russia, Central Asia and Europe, a project aligned with the company’s objectives after coming under RZD Russian Railways control.

Gefco now offers rail services to Russia via Manzhouli and to Kazakhstan via Alashankou (see map). With lead times half those of sea, some manufacturers have used the rail link as an alternative to air freight for moving high value products or expedited freight. Gefco, for example, has moved spare parts for a Chinese OEM to Cherkessk in southwest Russia.

For Gefco, however, spot services alone won’t be commercially viable. “The idea is to switch to regular block trains,” says Poitrineau. “That means regular frequencies and a fixed cost. You must have a very solid portfolio of clients to do it, otherwise you will sink.”

Long-distance rail between China, Russia and Europe is a long-term ambition for RZD, and there have been attempts to expand the service over the past decade with varying success. Gefco has explored options for rail flows from China as far back as 2006. Other providers, including DB Schenker, have pushed services on the route. BMW uses rail from Germany to Shenyang in northeast China. Mazda regularly used the Trans-Siberian route from Japan to Europe for vehicles, but has since stopped using the service.

Changes around the world

Gefco is in the midst of global growth and considerable change. See these other stories for further coverage

Two years ago, before RZD took control of Gefco, the logistics provider had planned to use the rail link with PSA to move components from China to the carmaker’s plant in Kaluga, south of Moscow. However, Ambrogio says that a drop in sales and production in Russia meant that the freight volume out of China for PSA has so far been insufficient for rail, and so the cargo moves by sea.

Ambrogio believes a turning point is coming, however. Gefco has seen double-digit increases in trade between China and Russia, as well as with Kazakhstan, including for CKD. Chinese carmakers are targeting the Russian market aggressively, often with kit production that requires up to 50 containers of material per shipment. “We have done studies for a number of Chinese carmakers already,” he says.

Ambrogio suggests that the growth of manufacturing in western regions like Chengdu and Chongqing – thousands of kilometres from China’s coast – will lead to more vehicle and freight flows via western routes. “We are working on connecting Chengdu and Chongqing to Russia and Europe through Alashankou,” he reveals. 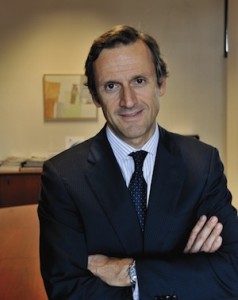 Growing with the right customers

Despite buoyant markets, the road to growth in Asia is not guaranteed. The rail service with Russia has potential, but sea competition is strong. Difficulties in the Russian economy, not least in the wake of the Ukraine crisis, will not help. Meanwhile, within China there is tough competition across the market. Chinese OEMs are price sensitive, says Ambrogio, including joint ventures where the Chinese partner has a stronger influence in logistics. In south-east Asia, Poitrineau (left) admits that many have entered the market before Gefco.

But Poitrineau and Ambrogio believe the region is maturing, and the demand for more sophisticated services will rise, such as for more advanced inbound services in Thailand. “I think we have an opportunity to work more closely with tier suppliers there, for example,” Poitrineau says.

In China, Ambrogio is wary about going deeper into areas where it would struggle to compete with Chinese or subsidiary providers, particularly those that keep costs artificially low using overloaded and illegal trucks. However, Ambrogio and Poitrineau do not rule out the expansion of the joint ventures or even creating others. Already, Gefco plans to invest in its own fleet of trucks for vehicle logistics to better control cost and quality. The trucking fleet could serve import and export vehicles between ports, rail hubs and dealers, along with domestic distribution – although Ambrogio stresses that the services must be up to the company’s standards.

“We can’t compete and don’t want to compete with local logistics operators, particularly where the only focus is on price,” he says. “As an international provider, we’re looking to bring value and to use our global network and expertise – it’s not something all Chinese OEMs will appreciate.”