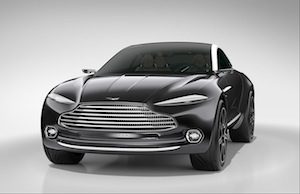 Aston Martin has announced that it will build a new model in Wales, creating thousands of jobs across the supply chain.

The OEM will build the crossover DBX (first shown as a concept in early 2015) in a facility in St Athan in Glamorgan. It will be Aston Martin’s second manufacturing facility in the UK. The other is in Gaydon, in Warwickshire.

Aston Martin said it expects to create 1,000 jobs across the company’s two manufacturing sites between now and 2020. Factoring in the entire supply chain, a further 3,000 jobs are anticipated as a result of Aston Martin’s investments. The plant at St Athan will employ 750 people.

The new site occupies around 90 acres and is currently being used by the Ministry of Defence. Aston Martin will re-purpose some of the facilities on the site, which include three aircraft hangars, with work beginning in 2017. Full vehicle production is expected to commence in 2020. Demand for the DBX is expected to be high in China and the US, and Aston Martin predicts that more than 90% of the vehicles produced will be exported.

“Through a detailed evaluation of over 20 potential global locations for this new manufacturing facility, we were consistently impressed with the focus on quality, cost and speed from the Welsh Government team,” said Dr Andrew Palmer, CEO of Aston Martin. “As a great British company, we look forward to St Athan joining Gaydon as our second centre of hand-crafted manufacturing excellence.”

Christian Stadler, professor of strategic management at Warwick Business School added, “This is obviously good news for Wales with 750 news jobs and probably much more in the supply chain…[.] The Aston Martin decision is in line with a broader trend: labour cost is no longer the main consideration. Smart companies are particularly wary of the implications in terms of quality and image. We have seen something similar for example when Porsche decided to produce the Porsche Cayenne in Germany rather than the US (close to the customer), or in Eastern Europe (lower costs).”

The DB11 (the replacement of the DB9) will go into production in Q3 this year at Gaydon. Over the next five years, Aston Martin will replace and expand its entire sports car portfolio. The Gaydon facility will expand production to a planned maximum volume of 7,000 sports cars a year by the end of the decade.