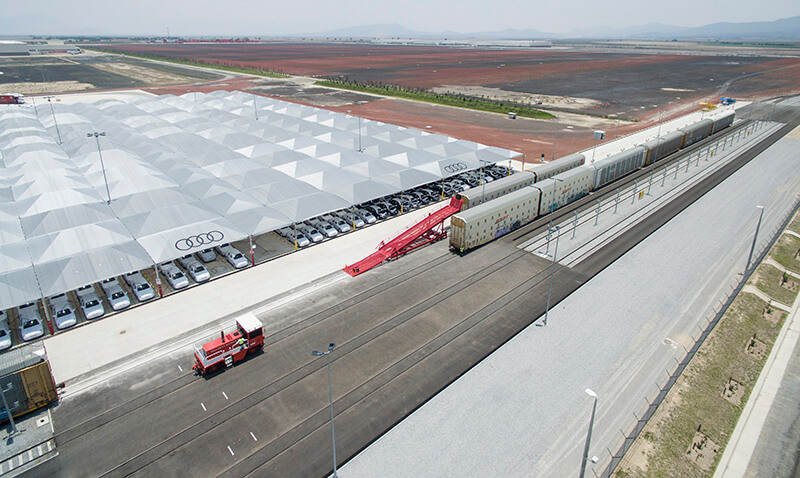 When Audi opened its assembly plant in Mexico in September 2016, it was a milestone achievement on a number of levels. It was the first factory the German carmaker had set up outside Europe and the first that it was exclusively managing overseas (the two factories in China are joint ventures with local partners).

The facility in San José Chiapa was also responsible for making a completely new vehicle exclusively – the Q5 – and exporting around 95% of its output around the world .

What is more, Audi used the set-up of the facility in San José Chiapa to introduce new production and logistics systems that employed the latest digital technology.

At the same time, Mexico was a totally new place to work for Audi personnel, which meant negotiating, recruiting and training in a different culture and in a different language.

No wonder that Audi México’s director of production control and logistics, Peter Koltai, describes the process from the decision to build the factory (in September 2012) to its opening as a very challenging journey, and one that tested the personal and professional limits of all those involved.

Nevertheless, the team achieved its goal and the plant and supporting logistics infrastructure are all in place. The factory is now in its second full year of production with some notable successes already gained, not least in the management of outbound logistics.

Multimodal optionsLast year, the plant in San José Chiapa made 158,550 Q5s (with more than 62% local content) for global distribution. Its top three markets for the Q5 are China (shipping CKDs and parts), Europe and the US. The company has some flexibility in the modes it uses to ship vehicles out of the plant, but 60-80% is moved by rail either to the port of Veracruz or north across the border to the rest of North America. It also moves volumes to Lázaro Cárdenas port on the west coast for Asia exports.

“The biggest part [of our output] is taken to the US by train but we also ship them from Veracruz to the US east coast, subject to seasonal differences,” explains Koltai. “If it is required, we can put more on the train, such as if we have problems like we did in Houston.”

At the end of August last year, Hurricane Harvey shut the port of Houston and badly flooded the rail network in the area, leaving carmakers and their transport providers using both rail and short-sea out of Mexico looking for contingency routes.

Audi also uses truck, and its success in managing available capacity for outbound flows is down to planning between those modes of transport.

“From the very beginning, we set up a strategy to try and use both rail and truck,” says Koltai. “I think that was a major factor in the success we have seen up to now. We have given a capacity demand plan to the rail and truck companies. Additional to that, there are enough companies offering their services for trucking on the Mexican market, so you can react on it very flexibly.”

RFID in the yardThe Mexico plant has a dedicated finished vehicle yard and, in terms of rail, loads around 580 cars a day. Audi works with the Mexican rail provider Ferromex to move vehicles to the port of Veracruz for short-sea shipment to the US or for deep ocean shipment to Europe and other global destinations. KCS de México, the division of North American rail provider Kansas City Southern, takes the vehicles directly north to the US border on central and western routes.

"From the very beginning, we set up a strategy to try and use both rail and truck. I think that was a major factor in the success we have seen up to now." - Peter Koltai, Audi México

Audi’s Mexican factory is the first in the Volkswagen Group to implement RFID technology for the complete material and container flow. That extends to the outbound side, and Koltai explains that Audi has a passive RFID yard management system providing full visibility of the vehicles awaiting shipment.

“[The RFID system] enables us to see at any time where our finished products are in the yard and, as a result, we can track and trace all of our deliveries,” he says.

That system is also used to track vehicles being shipped out on the 150 or so road-based carriers leaving the plant every day. Audi works with three main finished vehicle hauliers in Mexico – MexLog (Mexicana Logistics), ATR (Auto Traslados sin rodar) and TLE (Transportes Logisticos Especializados). Koltai says the carmaker has not faced any major problems in finding capacity with its trucking providers, other than an occasional shortage of trailers.

“It is not a long-lasting problem but just a question of how they react to our demand,” he says.

The contracts Audi has with its outbound logistics providers accord with its global standard, he adds.

All Q5s leaving the plant in Mexico have a complete fabric body cover to ensure protection from the environment and the damage rate on finished vehicles is as low as for any of its other production locations, according to Koltai.

The Tuxpan solutionThe only place where capacity is compromised is in the delay caused to trains and trucks because of bottlenecks, especially in and out of Veracruz port, currently the only port on the east coast of Mexico that Audi uses. Koltai says the exclusive reliance on that one port, known for its infrastructure challenges, was a risk Audi factored into its plans for Mexico, but that this risk is something it is now addressing in planning to use alternative ports.

“We knew [infrastructure bottlenecks] existed and since the beginning started developing the port of Lázaro Cárdenas, and this year Tuxpan as well.”

Audi Mexico has been carrying out trials to the port of Tuxpan, which is north of Veracruz. Work on the main road link to Tuxpan has recently been completed and provides Audi with easy access for trucks from San José Chiapa (there is no rail link to the port).

Koltai admits there are some potential challenges when it comes to loading ro-ro vessels at Tuxpan but says the port has a good infrastructure and the potential to expand operations without undue delays because of lengthy development times (as is the case at Veracruz).

He also says that while there are often delays in unloading trucks at Veracruz, there were no such problems at Tuxpan. “We will try to solve the [Veracruz] bottleneck with this new alternative,” he adds.

There are also occasional delays at tollgates on the road network in Mexico, with some reports that it is normal to wait 20 minutes. Koltai admits this is a problem in some areas but is keen to point out that work is being done around Puebla (70km from San José Chiapa) to ease congestion and increase capacity. It is, he points out, just a case of waiting for the right infrastructure to be in place.

Government interventionAudi México’s outbound logistics is also a success because the company has not suffered any theft of its vehicles going out either by truck or rail, says Koltai – something of an achievement given that theft and vandalism are significant problems in Mexico, especially around the Veracruz and Puebla areas at the moment.

Audi is in regular discussions with its transport providers and reporting incidents to the Mexican Association of the Automotive Industry (AMIA), which is a conduit to the government. “The rail companies say that they cannot solve the issue by themselves. They need the help of the government,” admits Koltai.

Previously the government in Mexico has deployed troops at various hotspots in the country, including in Guanajuato and other parts of the central Bajío region, to tackle the organised gangs targeting trains which carry automotive freight. However, military intervention is only effective temporarily and has resulted in the problem being pushed to Veracruz and Puebla.

Koltai says the sector as a whole needs to solve the vandalism problem as soon as possible, noting the disruption caused to the outbound supply chain when vandalised vehicles have to be returned to the plant.

Nafta and the futureTalking about another potential disruptor – the outcome of the Nafta renegotiations – Koltai sees it as a waiting game.

“We don’t know what the result will be until the end of discussions, so we will not make speculations. In the end, we will work with whatever the outcome is,” he comments. However, he is keen to emphasise that the factory in Mexico was established to make vehicles for the world, not just theUS market.

“The outcome of the Nafta talks will have an impact on us – no question – but what it will look like, we will have to find out then,” says Koltai. “At the moment we continue to work under the normal regulations and none of our daily business is impacted at the moment.”

According to Koltai, the more immediate priorities for 2018 include the competitive optimisation of processes within the VW Group as a whole, along with solving the bottleneck at Veracruz and tackling the issue of vandalism.

[related_topics align="right" border="yes"]“We are in direct competition with other VW Group factories, so we have to prove that on cost and efficiency we are as good as the other factories in Europe and the other countries,” he says.

Koltai has been director of production control and logistics at the San José Chiapa plant since 2015 but has actually been working on the project to establish a plant in Mexico since 2013. With everything now in place and all investments for the current production cycle complete, he has been reassigned to a new role at Audi AG as head of transport logistics, replacing Heiko Schultz. The carmaker has still to announce who will replace Koltai but whoever it is, Koltai says a priority for them will be maintaining team spirit, something crucial for the future of the business, which will be run by a greater percentage of Mexican managers.

“We need to make sure the team spirit does not disappear and getting together the German and Mexican cultures is a major factor,” he says. “Things like budget and infrastructure you can work on and dictate, but it is harder to tell people they will be friends and solve problems together regardless of the time it takes. If you can achieve this cultural link you will be successful but if you don’t, you will struggle somewhere along the line. You have to culture a team with shared understanding.”