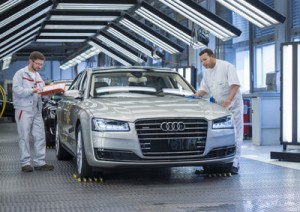 Audi has announced that it is restructuring its international production network to accommodate what it calls ‘mobility of the future’. The moves will have a significant impact on logistics and supply chains.

From 2018, large series production of the first purely electric driven Audi SUV will begin at its Brussels plant. The OEM has said that the plant will also produce its own batteries, and will become a key plant for electric mobility at the Volkswagen Group.

Production of the Audi A1 will move from Belgium to the Seat plant at Martorell in Spain. The Audi Q3, which is currently produced in Spain, will be built in Győr, Hungary. Production of the Q3 began in Spain in the first half of 2011, and the plant has an annual capacity of more than 100,000 cars. In 2014, 112,815 units came off the production line.

Currently, the Győr site in Hungary produces four Audi models: the A3 Sedan (since June 2013), A3 Cabriolet (since October 2013), TT, and TT Roadster. It also develops and manufacturers engines for Audi and other VW Group companies. In 2014, the plant produced more than 1.9m engines and 135,232 cars, so it is likely that, with the addition of another model, production at Győr will continue to grow. Other models on the MQB platform could potentially be manufactured at Győr. However, if the plant were to take over the capacity of Martorell in future it would need to be significantly updated and upgraded.

Rupert Stadler, chairman of the board of management of Audi said, “The new model distribution will enhance our production efficiency and strengthen all of the sites involved. It will allow us to utilise further synergies within the Volkswagen Group and to bundle key competencies.”

The restructuring decisions will protect jobs and promote internationalisation of the production network, according to Audi.

Audi is a major profit and innovation centre for the entire Volkswagen Group. The company’s in-pant and inbound logistics in Europe have helped to maintain high volumes and product variety despite space constraints in factories, and have set the standard for global expansion in China, Mexico and elsewhere. Editor Chris Ludwig took an extensive look at Audi’s highly efficient and complex supply chain at the end of 2014.