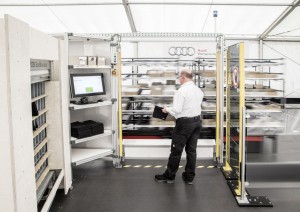 Audi is currently trialling driverless transport systems (DTS) to deliver goods to employees at its plant in Ingolstadt.

The OEM said it is the world’s first automotive manufacturer to implement such a DTS based goods-to-person concept. Audi employees have described the new warehouse as a “supermarket of the future”, as the system knows which parts the workers need, and provides them with the right goods at the right time.

Axel Bley, head of logistics concept development, Audi, says, “Autonomous goods conveyance is another pioneering development towards the factory of the future. By means of intelligent connectivity, we achieve additional efficiency and flexibility, while easing the work of our employees.”

The DTS move the goods autonomously by driving under the shelves, lifting them up and transporting them to a central picking station. Once at the picking station, symbols on a monitor show the employees which goods they need to put into which place.

Audi’s previous person-to-goods system required wide lanes and picking bays, but with the new system shelves can be positioned much more closely together, reducing space requirements by 25%.

A management system coordinates the DTS so they always arrive at the right place on time. The robots receive the order to bring a shelf for commissioning in the pick station by a wi-fi connection. While travelling, the DTS navigate by following QR codes on the floor, which are read by a camera underneath the DTS.

For employee safety, the robots move in a separate area from where humans work. The new system has also made workplaces more ergonomic, reducing working time in the picking bays, and long walking distances and pushing heavily-loaded material carts.

The new system is also more versatile. New or altered components can be quickly integrated into the system. “All the shelves are mobile, so where they are located is no longer important. With an increasing number of parts, it is enormously important that we can react flexibly,” Bley said.

The robots run on eight rechargeable batteries with a running time of around seven hours. Once the charge drops below 40%, they return automatically to charging stations. The systems are recharged for two hours via induction plates on the floor, then return to transporting shelves. They can achieve speeds of 3.6km per hour, whatever weight they carry, and can transport a maximum of 600kg.

A spokesperson for Audi told Automotive Logistics that even in the face of all this automation, the worker remains at the centre. "Job profiles may change, but Audi will never have a factory devoid of people. Rather, people and machines will complement one another in their strengths. While robots handle monotonous, physically strenuous and stressful jobs, it is people who will be executing value-adding production processes – and it will always be down to them when creativity and innovation are the order of the day."

Currently, the systems are being tested for the commissioning of the owner’s manuals for the Audi A3 models, with additional commissioning stations expected next year.

The spokesperson for Audi said that the OEM has been using various other driverless transport systems in the Ingolstadt's logistics function for many years, and uses the 'Ray' robot in its vehicle dispatch control department.