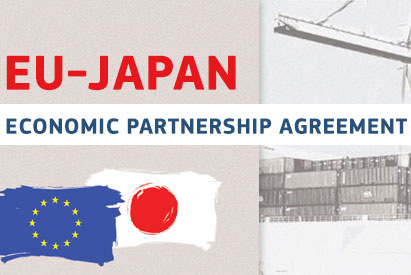 The automotive industry has secured special terms in the EU-Japan free trade agreement (FTA) that came into effect on February 1.

To address specific sensitivities in the 28-member trading bloc, the EU said motor vehicle tariffs would be lowered in stages during a seven-year transition period, before being eliminated. The EU-Japan Economic Partnership Agreement also removes several long-standing, non-tariff barriers by endorsing international standards on cars.

When the pact was signed in July 2017, Europe’s automotive sector body, ACEA, said such measures would provide some protection against a sudden and substantial increase of imports, or the imposition of non-tariff measures by Japan.

The association added that it recognised progress made by Japan in harmonising its vehicle standards with UN regulations, so an EU type-approved vehicle could be sold in Japan without the need for costly modification. ACEA said it trusted that commitment would continue for future regulations.

“The issue of the imbalance in the taxation of subcompact cars, known as kei cars, could not be addressed in the context of the FTA negotiations,” it added. “Nonetheless, ACEA expects that this will form part of the overhaul of the taxation system planned for 2019.”

The association pointed out that it supported trade agreements which were free and fair and provided mutual benefits, and described the EU-Japan FTA as a positive signal for international trade.

Echoing those comments, Mike Hawes, chief executive of the UK’s Society of Motor Manufacturers and Traders (SMMT), said last week: “We would always advocate for free and fair trade. Japan is an important market for us and anything that reduces the barriers, we very much welcome. There is an increase in demand in Japan, up 25% last year for British-built cars, so in principle we very much welcome that.”

However, whether the UK will ever actually benefit from the agreement is in doubt, given its looming exit from the EU on uncertain terms.

Among the gains he highlighted were the removal of €1 billion ($1.14 billion) of duties on European exports to Japan which, he said, would “turbo-boost the trade we already do together”.

Trade commissioner Cecilia Malmström added: “The stage is set for a significant boost in trade between us, which in turn creates jobs and lowers prices. It is now up to businesses and individuals to make the very most out of these new trade opportunities.”

Earlier fears that the 2015 ratification of another FTA with South Korea would lead to a flood of Korean car imports have never been realised, the EU pointed out, stating: “In fact, it was European exports to South Korea that saw a big rise. EU car exports tripled from €2 billion in the year before the agreement came into force to over €6 billion four years later.