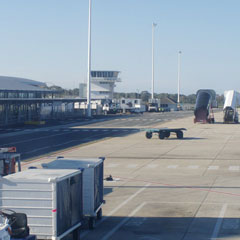 The Kwazulu-Natal provincial government in South Africa is to make use of land being developed for a new port on the site of the old Durban International Airport to create an automotive supplier park, with the aim of expanding the export of new vehicles.

This plan was announced by state premier, Senzo Mchunu, during the official commissioning of a new production line at Toyota's Prospecton plant, located to the south of Durban.

Last year Toyota produced 156,000 units at the plant, of which around 80,000 units were exported to Europe and Africa. The plant has capacity to build more than 220,000 units.

State transport provider Transnet bought the former airport site in 2012, announcing that it would be converted into a terminal equipped with 16 container berths and five ro-ro berths. The redevelopment is estimated to cost around $9.55 billion.

However, at the same time, statistics released by the National Association of Automobile Manufacturers of South Africa (NAAMSA) suggest that there is a current decline in new vehicle sales. In January of this year, for example, 53,025 units were sold, down 6.8% on the comparative month in the previous year.