AvtoVAZ to launch assembly of Lada cars in Egypt 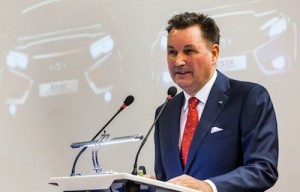 AvtoVAZ is launching production of Lada-badged cars in Egypt this year with local assembler Al Amal. The Russian carmaker will deliver 1,500 semi-knockdown (SKD) kits to the country in 2015, though the plant has capacity for annual production of 9,000 on one shift.

“This year AvtoVAZ expects to deliver to Egypt 1,500 assembly kits and the same amount of finished vehicles, while in future it could be increased to 10,000 cars a year,” said Bo Andersson (pictured).

These plans could make Egypt AvtoVAZ’s second largest foreign sales market after Kazakhstan and substantially help it towards its stated target of exporting overall volumes of 100,000 cars a year.

According to Andersson, the company is not looking for a new partner in Egypt, despite a strongly competitive local market. AvtoVAZ is expected to use Renault-Nissan’s distribution network in the country. This follows comments made in recent weeks by Carlos Ghosn, head of the Renault-Nissan Alliance, that the company may help its Russian partner with plans to expand export supplies. The Alliance already has well-developed distribution contacts in Egypt.

The president of Russian car distributor Favorit-Motors, Vladimir Popov, stated that such cooperation would definitely decrease AvtoVAZ’s potential spend for its foreign expansion. Meanwhile, Vladimir Bespalov, an analyst at Russian agency VTB-Capital, said that while the arrangement could be of benefit for both sides, AvtoVAZ could find itself competing locally with Renault-Nissan in the economy segment.

Either way, AvtoVAZ appears to have abandoned plans for the construction of large fully localised plant in Egypt. Last year it was planning to set up an agreement with local state-owned company El Nasr. However, political instability in the country forced the carmaker to put these plans on hold.

At the same time, according to Bo Andersson, AvtoVAZ still believes in the potential of the Egyptian market, and in future the country may be used as a foothold for further supplies to other countries in the Middle East and North Africa. According to official figures, AvtoVAZ’s sales in Egypt have tripled over the recent decade and continue to grow despite the overall fluctuations in its export activity.