AvtoVAZ to launch volume export of cars to Sweden in 2015 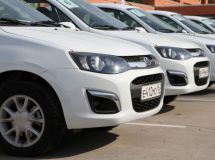 From the beginning of 2015, Russian vehicle maker AvtoVAZ will begin exporting vehicles to Sweden in a bid to gain a foothold in the Scandinavian market over the next couple of years.

The plans were announced at the Russian-Swedish Investment Forum, ‘Future projects: the path to innovation’, which was held recently in Stockholm.

The vehicles will be moved to Sweden by distributor, Lada Scandinavia. A spokesperson for the company admitted that vehicle exports there have only ever been made in small test volumes of 30 vehicles per year, despite the company having been established more than three decades ago. However, market research conducted by AvtoVaz in recent months has revealed that the signs were positive enough to launch full-scale exports, though the details of those results were not made available.

"We conducted a marketing [study], and we know that there is certainly a niche for these cars on the local market,” said the spokesperson. “The potential buyers and sellers are already waiting for us. Lada Kalina will probably be the cheapest car in the Swedish market. Also we plan so supply the local market with Lada Granta and maybe Largus.”

Representatives from AvtoVAZ are reportedly convinced that now is good time for increasing exports to Sweden because of the drop in the exchange rate of the Russian ruble against the euro.

According to official statistics, AvtoVAZ is currently experiencing poor sales in European Union markets: for the first nine months of 2014, compared to the same period last year, AvtoVAZ’s sales in Europe fell by 45.7% to 2,232 vehicles.

However, according to Bo Andersson, head of AvtoVAZ, who is rumoured to be behind the initiative, there is good reason for targeting Sweden.

"According to the opinion polls, the people [in Sweden] either love us or do not like us at all,” said Andersson. “It's a wonderful position: no one remains indifferent. People joke about some models, but we are confident about the future [on the local market]."

Analysts have speculated that if AvtoVAZ gains a foothold in the Swedish market, within two to three years it will look to expand sales into Denmark, Norway and possibly Finland. The new strategy is rumoured to be Andersson’s personal initiative. The CEO is a Swedish national, and is confident in the prospects of the Sweden market for the Russian OEM.

A figure on proposed export volumes has not been revealed, though insiders at the company have said that in 2015, numbers could amount to between 4,000-5,000, with further supplies depending on the sales in the first year.

The vehicles will be exported by ocean from the port of St. Petersburg, presumably directly to Stockholm, which is the shortest and most economical route.