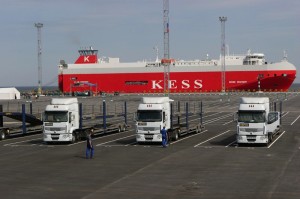 Ports with automotive terminals on the Baltic Sea have reported losses because of the sharp drop in car and components imports to Russia after the last year’s devaluation of the Russian ruble. Market analysts warn that any further decrease in supplies could result the potential closure of the automotive terminals at those ports.

“Ust-Luga port does not exclude the possibility of a full cessation of vehicle imports to Russia,” said Michael Talalenko, the general director of Commercial Sea Port of Ust-Luga. “The decline in imports of cars by sea began in the middle of last year and, as of now, has reached about 60% [of previous volumes].”

As a result Russian Baltic ports have seen a decrease in profits from their automotive terminals. In 2014, for instance, the decrease in the value of a cars imported via the Baltic ports was 13.5% or $2.2 billion, compared to the overall value of imported vehicles into Russia, which stood at $13.9 billion, according to the data of the Federal Customs Service of Russia.

Large sections of the auto terminals remain empty according to representatives at the ports and those managing smaller facilities are considering a temporary halt on operations.

The impact of production cutbacks has also been felt outside of Russia. The suspension of car production at the joint venture plant PCMA Rus in Kaluga, which makes Peugeot, Citroën and Mitsubishi vehicles, has hit the Estonian logistics sector and the country’s largest cargo terminal – Muuga Harbour – at the port of Tallinn.

That is likely to have had an impact on Transiidikeskus, the operator of several container terminals at Muuga Harbour, and one that has been involved heavily in the storage of automotive components, though the company has so far offered no comment on the situation.

Mitsubishi's plans to resume the regular cargo train traffic from Muuga port to its assembly plant in Kaluga, which was was suspended at the end of 2014, are also likely to have been hit.

The PCMA closure has also been bad for Estonian Railways’ cargo division, EVR Cargo, which has been involved in the supply of components on containers to the Russian border. In March, EVR Cargo’s volume of container traffic decreased by 33% and figures for April are expected to be worse.

Stevedoring company Container Terminal St. Petersburg has also reported a decrease in container traffic by 23% in the first quarter of 2015, which reflected the general decrease in the supply of container traffic at St. Petersburg port by 27% at the beginning of the year. This drop is mainly related to the halt in the supply of components to the GM plant following the company’s decision to pull production out of the plant and Russia more generally.