Barcelona port authority has signed a €450,000 ($531,000) contract with the Pasquina construction company to improve road access to terminals operated by Estibarna and Autoterminal. The work will involve upgrades to the main roundabout on the port's arterial road. Work will take two months to complete and is viewed as essential to allow Autoterminal, in particular, to operate more efficiently.

Autoterminal, one of two finished vehicles terminals in the port along with Setram, occupies an area of 820,000 sq.m and can handle up to 45,000 vehicles at four ro-ro ramps. 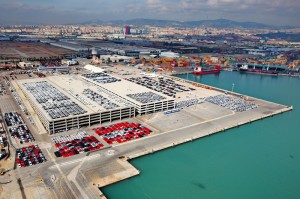 It has a concession to operate at its present site until 2020 and recently took over part of the former Tercat container terminal, resulting in a significant reconfiguration of its operating area.

Currently up to six car carriers can dock at any one time at the terminal, given that the quay is now 1,210 metres long.

While much of its import-export traffic arrives by train, there being four rail sidings, increased road side access is also needed to cope with more road transporters. The facility also has four multi-level parking areas, which can hold up to 21,000 units.

Spanish carmaker Seat uses the port of Barcelona, which is located 40km from its Martorell plant. Barcelona also provides feeder services to other ports, especially to Emden, used by the Volkswagen Group, for transhipment to deep-sea vessels.