The collapse of Britishvolt’s battery manufacturing ambitions in the UK, which was announced last week, is a setback for the UK automotive sector as it strives to become a competitive market for electric vehicle production.

The localised production and supply of lithium batteries in the UK is essential for the future of domestic manufacturing. The Britishvolt factory, which was originally due for completion in 2024, was going to be the UK’s first largescale battery manufacturing facility, with annual capacity for 300,000 units, equal to 48 GWh. 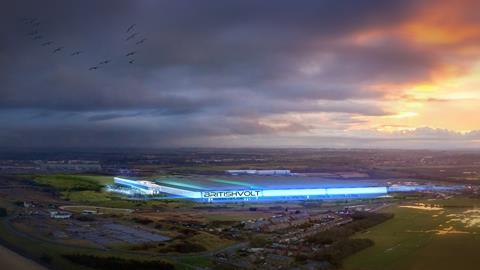 Britishvolt had great ambitions for its gigafactory in Blyth, north-east England

In a statement, consulting partnership EY-Parthenon, which is now handling the administration of the company, said the collapse of Power by Britishvolt, which is part of the wider Britishvolt Group, was because of insufficient investment in the development of its sites in the UK Midlands and north-east of England.

Britishvolt was in the early stages of building a battery gigafactory in Blyth, Northumberland, as well as investing more than £200m ($247m) in battery cell scale-up facilities at Hams Hall in the west Midlands. The company had signed memorandums of understanding with Aston Martin and Lotus to design, develop and industrialise battery packs.

A spokesperson for Aston Martin said that the MoU is signed with Britishvolt in March 2022 was not a guarantee of any future orders and formed part of the carmaker’s strategy to explore greater optionality for its future EVs.

“The recent challenges at Britishvolt will have no impact on our electrification timings, with the launch of the first battery electric Aston Martin targeted for 2025,” said the company in a statement.

It had also signed a €36m ($38.3m) purchase agreement with the Monbat Group to acquire EAS, which also makes battery cells, to expand its commercialisation of lithium-ion batteries. It is not clear how the collapse of Britishvolt’s UK manufacturing plans affects those agreements and EY-Parthenon said it could not currently comment on them.

Uphill battle
According to Daniel Harrison, chief analyst at Ultima Media’s Automotive intelligence unit, Britishvolt’s ambitions to be the UK’s first major gigafactory were challenged from the start.

“Unlike many gigafactories, Britishvolt wasn’t part of a joint venture to share the investment risk and crucially didn’t have any battery supply agreement with a major OEM,” he said. “And Brexit didn’t help either, complicating supply chains and trade flows to and from the continent.”

Harrison said that was the likely reason BMW pulled out of Mini EV production in the UK, leaving just Nissan making its Leaf EV in Sunderland.

“Added to which, the recent surge in UK electricity prices and interest rates made the plant even less viable and felt like the final blow for Britishvolt,” he concluded.

The failure of the business means the loss of nearly 300 jobs. The company had goals to directly employ 3,000 when the gigafactory was up and running.

“Britishvolt provided a significant opportunity to create jobs and employment, as well as support the development of technology and infrastructure needed to help with the UK’s energy transition,” said Dan Hurd, joint administrator and partner at EY-Parthenon. “It is disappointing that the company has been unable to fulfil its ambitions and secure the equity funding needed to continue.”

While also lamenting the loss of jobs, Mike Hawes, chief executive at the UK’s Society of Motor Manufacturers and Traders (SMMT), remained optimistic about the prospects for the UK’s EV sector.

“Last week’s news is a blow, especially for Britishvolt’s 300 employees, but the UK’s promise as an EV battery production location remains, with strong demand, a skilled workforce, and attractive manufacturing sites, all providing a compelling investment proposition,” he said

Funding fallout
Britishvolt had secured £1.7 billion in funding this time last year, from both private investors and government funding. Following the UK government’s commitment to provide £100m for Britishvolt through its Automotive Transformation Fund (ATF), logistics property investor Tritax Management and investment company Abrdn announced their partnership in the project at Blyth. The two companies announced funding to build the shell and core of the facility, as well as developing an adjacent supplier park.

However, last week’s announcement is not a complete surprise given the UK government’s subsequent refusal to provide advance funding in support of Britishvolt’s plans. Last October the battery maker requested £30m of the overall £100m committed through the government’s ATF but the request for the advance was rejected.

A spokesperson for Tritax Management said it had no outstanding capital obligations with Britishvolt.

”Tritax Management LLP had raised committed capital to form a new fund which, subject to certain conditions and milestones, could finance the development of a supplier park and gigafactory at the Britishvolt-owned site in Blyth, Northumberland,” it said in a statement. ”The conditions for investment have not yet been met, so no finance has been released by TritaxManagement LLP for the development of the site.”

In a statement on LinkedIn, Andy Palmer, chairman of battery development specialist, Inobat Auto and a veteran of EV developments in the UK, said the collapse of the business signalled a lack of a transition strategy in the UK for EV manufacturing.

“Without multiple gigafactories built across the UK, our domestic industry faces obliteration from the likes of Europe, Asia and America, which do have a strategy and are investing accordingly. Time is running out for us,” said Palmer.

The next best option for the localised UK battery production is the gigafactory being built by Envision AESC in Sunderland, near Nissan’s car plant. Envision has been making batteries there for Nissan for more than a decade, originally for the Leaf EV, and it announced the construction of a second plant in December last year. That facility will have an annual capacity of 12 GWh and employ 1,000 people when it becomes operational in 2025.

Read more about the challenges for the battery chain in Europe