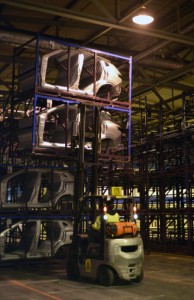 Logistics costs in automotive are now often more expensive than manufacturing vehicles within a plant, according to Nissan Europe’s purchasing and manufacturing boss. As a result, the company’s efforts in recent years to reduce those costs have been important to the success of the carmaker’s plant in Sunderland, in the northeast of England.

Such improvements – which include increasing pack density, reducing materials handling complexity and localising more suppliers – are reflected in the production of the second generation Qashqai, the plant’s flagship model, which started rolling off the line this week. As well has having a highly complex inbound supply chain, around 80% of Qashqais, along with other models built in Sunderland, are exported.

“We are very focused on optimising logistics costs,” Colin Lawther, senior vice-president for manufacturing, purchasing and supply chain management at Nissan Europe, told Automotive Logistics. “Typically now, 20% of the cost of making a car is in logistics, which is actually bigger than the manufacturing cost within the plant. We have a strong eye on these costs.”

With the start of new Qashqai production – the Sunderland plant’s third model launch in ten months including the European version of the Leaf and the Note last year – and preparations already underway to build the Infiniti Q30 later this year, Nissan has been making a number of logistics-related changes. According to Lawther, packaging has been one of the most important considerations in designing and optimising the supply chain for Qashqai and the plant.

“Once we’ve identified the logistics chain, the most important part for us is to design the logistics packaging so that we have maximum density,” he said. “We have a logistics engineering team that works with CAD design data to create standard packs optimised for nesting, protection and loading.

“Cubic utilisation is a global KPI within all the Nissan and Renault plants, and Sunderland is judged on how many cubic parts it fits into a standard container for Qashqai,” he added. “It’s a virtuous competition, because if you are at the top of that league table, it means that your manufacturing environment is receiving the lowest costs.”

Alec Patterson, senior engineer for project management at the Nissan Europe Technical Centre in Cranfield, north of London, said that engineers working on the Qashqai had carefully considered packaging designs throughout the development phase, including pack density and reducing picking errors.

“We have worked together with designers and tier suppliers, trying to reduce complexity and the potential for errors,” he said. “For long distance suppliers, we have worked on reducing weight and improving the recycling of packaging.”

​Lawther said that one of the initiatives at Nissan in recent years that has driven such improvements has been ‘Upstream Function Task Teams’, which involve suppliers in the design of next generation parts even before business is awarded. “We don’t wait for it to be too late and for the supply to start before packaging and logistics decisions are taken,” he said.

A move towards kitting

“Because Infiniti has a lot more personalisation and choice, we have to move to kitting because we can’t get that number of parts line side, or else we would need a line about 1,800 yards long,” said Kevin Fitzpatrick, vice-president of UK manufacturing.

The Sunderland plant is characterised by a large amount of just-in-time and just-in-sequence material delivery. The plant currently has eight suppliers that manufacture directly at the plant, including for seat assembly, dashboard facias, fuel cluster pipes, as well as sub-assembly for body shop. A walk through the trim and chassis area of the plant reveals how dashboard modules are assembled following a broadcast sent only hours before, and then moved by automated guided vehicles just-in-sequence to the line, where they are fitted to vehicles in just three seconds.

The sequence operations are complex. Currently, Sunderland has three off-site warehouses that sort and sequence parts. The largest, operated by Vantec Europe, was added last year just south of the plant, which compliments another Vantec warehouse west of the plant, as well as operations at the port of Tyne.

However, Nissan has been moving towards more towards kitting operations, particularly for growing product variants, to avoid increasing the sequencing in warehouses or crossdocks. The new Qashqai, for example, has more than 17,000 variations. “In the engineering phase, we tried to reduce complexity and the reliance on sequencing, as it is expensive and complex to sequence parts,” said Alec Patterson.

According to Fitzpatrick (pictured right), the amount of kitting at Sunderland is still below Nissan levels globally. However, the introduction of Infiniti will likely change that. Nissan is extending the body shop and the trim and chassis area for line two, where Infiniti is to be built, but more kitting will help it avoid having to further extend the line or add warehouse space. 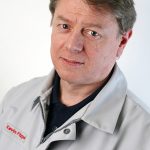 “We want to de-spec our inbound logistics, because the sequencing operations and preparation activities in the warehouse are very expensive,” he added.

A supply base local and global

Sunderland is the largest car plant in the UK; it has built more than 1m vehicles over the past two years, while the line that builds the Qashqai (and the Leaf) has run 24 hours per day since 2010 to meet demand. Nissan has invested more than £530m ($880m) in Qashqai engineering and production alone.

As such, Sunderland is a highly integrated operation, including having its own casting plant for cylinder heads, a unit shop for petrol engine assembly, an axle plant for suspensions and a lithium-ion battery plant for Leaf production. 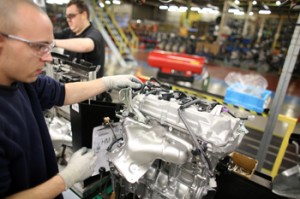 Nissan builds petrol engines at Sunderland, but imports diesel engines from France
A number of suppliers are also located in the Sunderland region just a short drive away. According to Lawther, about 80% of the cubic volume of parts for Qashqai is manufactured in the UK.

However, only about 58 of the 225 suppliers for Qashqai are in Britain, with the rest coming from more than 20 countries. A large number of globally sourced materials are high value, low cubic volume parts like engine control modules or APS activators, according to Lawther. But Nissan also sources heavier items such as diesel engines from France and automatic transmissions from Japan.

Fitzpatrick told Automotive Logistics that he sees more opportunities for suppliers in the UK, not least as the plant is expected to approach its 550,000-unit capacity next year with Infiniti production. SMMT, the UK carmakers’ association, has predicted that overall UK production could rise from more than 1.5m vehicles in 2013 to 2m by 2017.

“I see opportunities for a number of things, such as alloy wheels, tyres, much of which left the UK,” said Fitzpatrick. “With inflation and logistics costs in places like China and India, some companies are bringing this back.”

Fitzpatrick acknowledged, however, that the excess capacity in continental Europe has slowed the pace of investment into the UK. “If you are a big European parts supplier, there are lots of opportunities in the UK but there are factories that are not full in mainland Europe, which would require complicated restructuring first,” he said.

The use of more shared platforms and components is also likely to keep the plant’s supply chain complex and global. The new 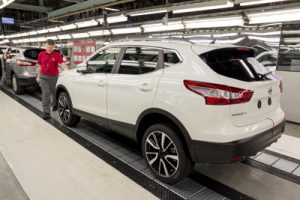 The Qashqai has suppliers from around 25 countries and exports to more than 130 markets
Qashqai, for example, is built on the Alliance ‘Common Module Family’ platform, an architecture that shares parts across multiple platforms and model ranges, and is expected to include 1.6m vehicles and 14 models across Renault and Nissan. The model shares parts with related models like the Nissan X-trail, built in Japan, and Rogue, built in the US, as well as a number of Renault models.

According to Fitzpatrick, although the new Qashqai is much more complex than the old one, its increased scale and efficiencies mean that it has not seen a commesurate increase in costs.

Other models at the plant also share platforms globally, such as the Note on the ‘V’ platform (shared with Micra in India), the Juke on ‘B’ platform and Leaf on the ‘EV’ platform, on which related models are also built in Barcelona and Mexico.

According to Lawther, Nissan single sources parts where savings in engineering exceeds logistics costs, which means material is imported from Japan, China, India, the US and Mexico as well as Europe.

“The design of many of the platforms is common, so wherever possible we will have a common design for part with one sunk set of R&D costs and one set of tooling design, even though manufacturing locations might be different,” he said.