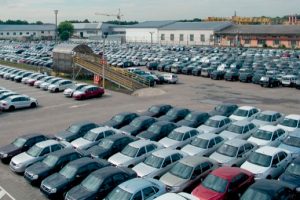 BLG Logistics’ subsidiary in Ukraine – BLG ViDi Logistics – has bought seven more car carriers to handle an increase in imports of finished vehicles to the country from Europe. The purchase also renews existing equipment that was bought between 2008 and 2010.

The company has bought trucks from Scania that are compliant with Euro 6 engine standards and the trailer equipment is being supplied by Lohr. BLG ViDi Logistics now has a fleet of 40 pieces of equipment operating in Ukraine.

Eugenia Mostovenko, BLG ViDi Logistics’ general director, said the investment was triggered by the recovery in Ukraine’s car market where sales last year rose by just more than 40% compared to 2015. That figure was backed up by Ukraine’s State Statistical Service, which also put the rise at around 40% and equal to 65,500 units.

In January 2017 sales grew by additional 51%, compare to January 2016, while country’s automotive association UkrAutoProm forecast that in total this year the domestic market will rise by between 32-38% compared to 2016.

Evidence of the demand is seen in the fact that the trucks and equipment most recently acquired have gone into immediate use following the purchase.

“For us it is very important that the car carriers are constantly in use because an unexpected layup becomes rather expensive,” said Mostovenko. “But this is not even about the cost of repair, the reputation of a reliable carrier is a much more important component. Our service contract [signed within the deal] with Scania will prevent unplanned downtime and help us to meet the terms of finished vehicle delivery.”

The purchase of the Euro 6 trucks also means BLG ViDi Logistics meets it environmental requirements and receives the necessary certification for international transport according the company.

“We requested all truck importers located in Ukraine for offers,” said a spokesperson for BLG. “Scania had the most attractive general conditions and a price which met our expectations.”

Major player in UkraineThe logistics provider did not disclose how many vehicles it moved into Ukraine in 2016 but it is believed that the company is largest logistics provider in Ukraine. It is managing import and transport inside the country for VW, Audi, Seat, Subaru, Mazda, Suzuki, Hyundai and Daewoo. That involves cooperating with BLG Group offices in Germany, Turkey, Poland, Slovakia and Slovenia, and providing customers in Ukraine with logistics services from a single source, the company stated.

According to Mostovenko, last year’s deal resulted in the merging of terminal and transport logistics assets, which accelerated the processing of customer applications and reduced the time required for almost all customs procedures for vehicle import to Ukraine.