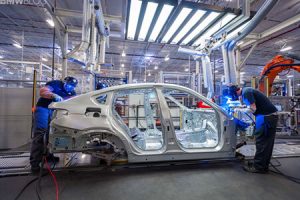 BMW has named the Kaliningrad region as the site of its new Russian assembly plant, Denis Manturov, Russia’s industry and trade minister, has revealed. The move has since been confirmed by a BMW spokesperson, according to several news outlets.

The German luxury car manufacturer has been looking at locations around Moscow, Leningrad and Kaliningrad for a new site for some time but eventually opted for Kaliningrad because of its well-established logistics channels and its “vast experience of operating in the region,” the company said, referring to the assembly of a limited range of its vehicles at Autotor’s facility since 1999.

As part of the new project, BMW will sign a special investment contract (SPIC) with the Russian federal government, said Manturov. Details of that have yet to be made public, however.

BMW said the regional government in Kaliningrad had created “a very favourable environment for investments”. In particular, the special economic zone (SEZ) in the Kaliningrad area allows those setting up business there to apply for subsidies from the state budget “which are comparable to the fees paid when importing automotive components into Russia”, the OEM told local newspaper Vedomosti. It did not confirm, however, whether the plant itself would be built in the SEZ.

BMW is considering several sites around Kaliningrad for the plant, according to regional governor Anton Alikhanov. The main option is a 56-hectare site in the Khrabrovo industrial estate, he said, where local authorities are currently upgrading the electricity supply and transport infrastructure.

The German carmaker would be building its plant over the next two and a half years, Alikhanov added, with the facility expected to be completed in 2021.

BMW will be the sole investor in the plant. The amount being invested has not been revealed but Alikhanov said it would be comparable with similar projects in Russia. BMW has said the plant’s capacity will be in line with its vehicle sales in Russia, which last year stood at 31,598 vehicles, according to data from the Russian Association of European Business.

Making cars locally would allow BMW to cut back on imports and stop subcontracted assembly at Autotor. The OEM has not yet revealed what models it plans to produce at the new plant, however, or what localisation levels will be involved.

It has already officially registered a new subsidiary, however – Kaliningrad-based BMW Rusland Automotive JSC – according to information from the state database of legal entities.

In addition to producing finished vehicle there, meanwhile, BMW has also applied for permission to manufacture certain parts at the new site – in particular engines and electrical systems.