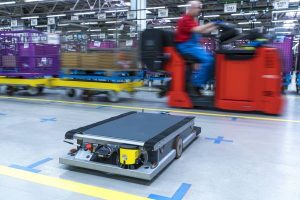 BMW Group is testing a number of autonomous vehicles on its factory floors as part of an automation drive that is expected to help cut costs by 5% per vehicle annually.

The project began this month at BMW’s logistics centre in Wackersdorf, Germany, where the suitcase-sized trolleys are being used to transport parts containers to the packing area in the Supply Logistics hall.

After a six-month trial, BMW plans to roll out the autonomous trolleys, which are made in-house, to other warehouses.

The robots are equipped with a digital map and radio transmitters, and drive independently to their destination. If a tugger train crosses its path, a sensor identifies the obstacle and stops the self-driving robot. It can be loaded with parts weighing up to half a tonne. The robots measure distance to three radio transmitters, which allows each one to calculate its exact position and route. Sensors help to identify critical situations, and it can act in response, as well as sharing its route with people and other vehicles. The robots can function without floor-mounted induction loops for navigation and are therefore free-ranging.

If the innovation is implemented in series production, BMW plans to use a 3D camera which will make navigation more accurate. The battery-powered radio transmitters mounted to the walls of the hall can also be expanded to other areas of logistics without major effort and at low cost. The trolleys are powered with recycled BMW i3 batteries, which provide eight hours' worth of energy, or a full shift.

Dirk Dreher, vice-president of freight supply at the BMW Group, said: "The development of the smart transport robot is an important milestone for the BMW Group when it comes to digitalisation and autonomisation in production logistics. This innovation project makes an important contribution to the agility of the supply chain in logistics and production. It enables the supply chain to adapt to changing external conditions quickly and flexibly."

Due to the increasing complexity of production and a rising number of customisation options, ensuring the right parts get to the line in the right order, just-in-time and just-in-sequence is more important than ever. BMW is hoping to reduce its production time per car to an average of 30 hours.

“If I’m not smart about getting the right parts to the right places, the whole line becomes cluttered with parts standing around,” Zipse said.

BMW has partnered with the Fraunhofer Institute for this project. In September 2015, the two began to collaborate under the BMW Enterprise Lab for Flexible Logistics label, looking at future solutions for logistics areas. The autonomous robot is being developed and tested at BMW Group's Innovation Park in Wackersdorf, the OEM's logistics hub for material management and just-in-sequence supply to BMW sites in ten different countries.

BMW hopes to reduce its costs by several hundred million euros in the coming years, so it can fund the development of self-driving features and other technologies for cars. Obviously these investments may not pay off for several years.

Tech on the floorBMW is not the only OEM to utilise the new and improving technology that is coming to market to improve logistics processes. Volkswagen, for example, is just coming to the end of a four-week trial of smartwatches and RFID armbands in order picking and materials handling processes and already uses around 100 tablet computers in picking trolleys and forklift trucks to improve routing across its Wolfsburg plant.