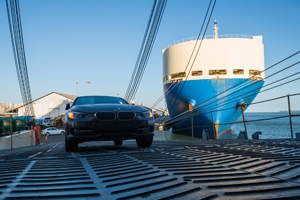 BMW plans to double exports from South Africa to around 70,000 units a year by next year and will use the port of Maputo in Mozambique to supplement volume shipments of the BMW 3 series. The ports will supplement the carmaker’s ongoing use of the port of Durban in South Africa.

BMW South Africa has traditionally used only Durban, where the car terminal is managed by the state-owned rail and logistics giant, Transnet. In a statement the company said that Grindrod Freight Services, which handles freight services for BMW and will serve as the private terminal operator in Maputo, was “instrumental” in securing the deal.

BMW has increased production from its plant in Rosslyn, north of Johannesburg, following the introduction of the third shift there at the end of last year. The plant makes the 3-Series in right and left hand volumes, and exports almost 75% of production volume to the US, Japan, Taiwan, Singapore, New Zealand, Hong Kong, Sub-Sahara Africa and Australia.

Annual production is expected to reach around 80,000 units this year, up from 50,000 in 2012. Bodo Donauer, managing director of BMW South Africa, said that the total number of vehicles exported will more than double the 33,000 currently exported.

“In line with this increase in volumes we have had to look carefully at our export logistics and, in this regard, using Maputo in conjunction with our existing export supply chain in Durban makes sound business sense,” Donauer said.

According to BMW, vehicle exports through Durban will grow by almost 20,000 vehicles, an increase of more than 60%. Another 14,000 vehicles, around 20% of exports per year, will also be shipped from Maputo as part of an integrated Southern African supply chain. Maputo is on the southeast coast of Africa and 550km from Rosslyn.

BMW works with Transnet for movements from its Rosslyn facility to Durban, 640km to the southeast. Cars are transported from the vehicle distribution centre near Pretoria to the harbour by rail where they are processed through Transnet’s vehicle terminal at Durban harbour.

Grindrod will handle freight shipments to Maputo, 550kms to the east, as well as the car terminal.

Walter Grindrod, group business development executive at Grindrod Freight Services, said that the company would handle all services starting from BMW’s vehicle distribution centre near the plant and through to the port, including road logistics, forwarding, terminal services and customs clearance for both South Africa and Mozambique . “We have run trials to test the system and are confident the export route is sound,” said Grindrod.

Grindrod has said the company expected to make two shipments per month to markets in Japan and other parts of the East.

“To play on a world stage, we need to ensure we are competitive in all elements of the manufacturing process, including supply chain and logistics,” said Donauer. “This means we have to develop top quality productive ports which operate at high levels of efficiency at competitive prices to ensure a stable logistics environment. The decision to use Maputo is the first step in ensuring the development of a robust, well thought out and competitive logistics network.