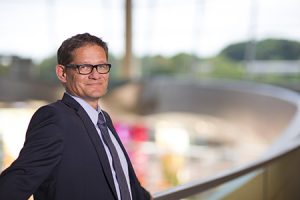 Mathias Wellbrock (pictured), currently general manager for plant dispatch and vehicle distribution at the BMW Group, will take on a new role from March 1st in plant logistics for the carmaker’s upcoming new plant in San Luis Potosi, Mexico. Wellbrock’s replacement in vehicle distribution will be Peter Hoerndlein, who currently works in BMW’s inbound logistics.

BMW’s plant in San Luis Potosi, in central Mexico, is expected to produce around 150,000 vehicles per year when it opens in 2019.

Wellbrock said in an email to logistics partners notifying them of the change that the Mexico role would be “a big step change”.

Wellbrock has been working vehicle logistics since 2007, and prior to that he worked in BMW’s inbound logistics for more than 20 years. Since 2011 he has also had responsibility for plant yard operations after BMW restructured its logistics management and added control of plant dispatch functions to the distribution department. Ulrich Wieland, vice-president of vehicle distribution, has led this department since 2014.

During Wellbrock’s time in outbound logistics he has seen not only a significant growth in BMW production and volume, most notably in China and the US, but he has also helped implement innovations in equipment and systems. Over the past ten years, for example, BMW has worked with rail provider ARS Altmann to develop a fleet of 1,000 covered rail wagons, becoming one of the first in Europe to opt for covered automotive rail wagons instead of the more common open carriages on the continent.

More recently, Wellbrock has been working in a team that has also been trialling the potential of using telematics technology in BMW vehicles to track vehicles globally.

Wellbrock has also been keen to stress his satisfaction with logistics partners. Speaking to Finished Vehicle Logistics last year, he credited providers ranging from truck to rail and shipping providers with their management of capacity and service. “Our logistics service providers are the real backbone of our systems, and we have them to thank for our stability in many instances across our major markets,” he said.