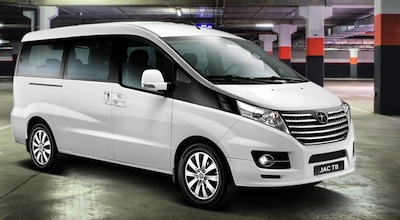 [Update June 15] The Brazilian Ministry of Industry, Overseas Trade and Services (MDIC) has revoked the licence it earlier awarded to JAC Motors, which had allowed it to become part of the country’s vehicle technology and supply chain incentive scheme, Inovar-Auto (Incentive Programme for Innovation and Optimisation of the Chain of Production for Motor Vehicles).

According to an MDIC press release, the manufacturer had not fulfilled the “physical and financial schedule of its investment project” as part of the licence granted in 2013.

The MDIC said the loss of the licence means that the company will have to return all of the tax benefits that it received for the importation of vehicles in 2013-2014.

However, a spokesperson for JAC Motors told Automotive Logistics that discussions with the Brazilian government over the decision are continuing and that the Chinese carmaker's plans to build a factory in the country to open in 2017 are going ahead.

"We have filed a project in October 2015 which provides for a new schedule of investments and we expect the government analysis as soon as possible," said the spokesperson. "Plans continue!"

MDIC stressed that it is very important that the Inovar-Auto programme be taken seriously and that the commitment undertaken by adherents to the programme be carried out in all seriousness, given the various tax benefits that it offers.

Each company enrolled in the programme has to seek renewal of its license every 12 months. While JAC Motors had its licence withdrawn, 25 other companies had theirs renewed, including Fiat Chrysler Automóveis Brasil, Ford Motor Company Brasil and Hyundai Motor Brasil Montadora de Automóveis and Toyota do Brasil.

Each licence contains a commitment on the part of the carmakers to investment in research, development, engineering, as well as to undertake part of their manufacturing process in Brazil; they must also meet energy efficiency targets.

The latest round of licence renewals are now due on May 2017.