Brazil struggles to keep supply chain costs from taking off 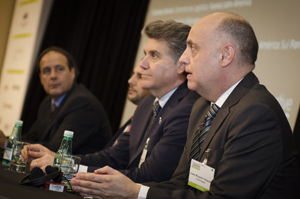 Click here to read the full version of this report.

In Brazil, the list of options is somewhat different. You can almost forget about rail – it’s used for only 2% of automotive component flows in the country, and not at all for vehicle distribution, according to the Brazilian carmakers association, Anfavea. World Bank figures reveal that the country has ten times fewer rail tracks than in the US, and energy and agricultural commodities dominate its use for freight. River transport is nominal, and there are no short-sea, domestic ocean services. That leaves road, although Brazil again has a severe disadvantage: just 212m kilometres of its roads are paved, or about 6% in the country, with a large amount of these in the state of São Paulo (in the US, the figure is more than 4.2 billion kilometres).

But as delegates heard at the 2013 Automotive Logistics South America conference, manufacturers have another option that would be rare in other markets: the helicopter. “We’ve used it many times in Brazil,” said Antonio Taranto, who is customer service operations director in South America for Ford, and has worked across the carmaker’s supply chain in Brazil and in the US.

Mauricélio Faria, general manager for logistics in Latin America for Fiat, nodded his head in agreement. “We have also regularly used helicopters to avoid production stoppages,” he said. Earlier in the day, UTi’s director of automotive for Brazil, Fabiana Nakia, had also quipped about sending a helicopter to collect a container to keep a plant running.

The helicopter option was just one example of the peculiarities of Brazilian and South American supply chains revealed at the conference, as the region suffers from severe constraints in its transport infrastructure. Gustavo Bonini, who is manager of inbound logistics at truckmaker Scania and also the coordinator of a logistics committee founded at Anfavea earlier this year, said that during the peak of the season for grain exports in March and April, queues from the port of Santos in São Paulo can stretch dozens of kilometres.

“It can take more than 12 hours to move just 20km to the port,” he said. He pointed out that a pig could cover the distance in a little more than an hour, while a human could walk it in four hours and a spider in about ten hours.

The impact for the supply chain is dramatic. The road queues combine with slow customs administration, low labour productivity and frequent disruptions to cause significant backlogs for ships trying to enter ports as well. Flavio Batista, vice-president of Latin America for Wallenius Wilhelmsen Logistics, said that it was common for ships to wait 15-20 days before docking. “The cost is tremendous when you consider the daily running costs of a ship, as well as the delays to cargo movements,” he said.

Bonini pointed to World Bank data that showed that the average price of exporting a container from Brazil had risen nearly 130% in the last five years to more than $2,200 – twice as high as in Germany and four times higher than China. The costs are similar for importing containers.

Fiat’s Faria said that the lack of rail options, along with the inefficiency at ports, has led the carmaker to use road transport for long distances that would otherwise be cheaper and more effective to move by rail or ship. “We move 100% of component material between Brazil and Argentina by road, a distance of around 4,000km. It’s ridiculous that we do that, but it’s more competitive than moving by ship and it’s much faster,” he said. 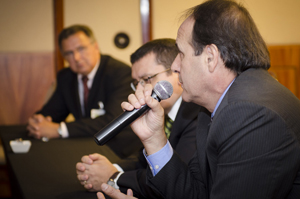 The issues risk not only causing headaches and increasing costs, but could also hold back growth in the Brazilian and South American economies. Anfavea has set a target for the sector of reaching 1m vehicle exports by 2017, more than double the current levels. However, speakers broadly agreed that the country’s port and inland connections would not be able to cope with such levels today.

Such issues are part of what is commonly known in the country as the custo Brasil (Brazilian cost of living), and coping with this price in logistics was the theme of this year’s conference. Indeed, the basics flaws in Brazil’s economy are bigger than an Automotive Logistics conference can tackle. Inefficiencies run across the supply chain and the economy, including higher prices for raw materials as well as labour costs. Brazil has one of the highest tax rates of any large economy, with consumption and industrial taxes making items like cars often as much as twice as expensive than in the US or Europe.

Brazil has a complex and slow-moving regulatory regime as well. It’s difficult to expand or build new facilities, whether plants, warehouses or port terminals, because environmental licences can take up to ten years to be granted, according to Tanibata. “There could be one crab living under a rock somewhere and a whole project is held up,” he said.

Taking all of these cost, trade and regulatory factors together, improving logistics operations can be a competitive advantage for manufacturers, as they strive to lower costs and get products to market as fast as possible despite all of the current obstacles. That impetus will only increase if Brazilian vehicle sales approach some market forecasts for up to 7m new vehicles per year (compared to around 3.8m per year currently) by the end of the decade. Carmakers including Fiat, BMW, Mercedes-Benz, Audi, Chery, Suzuki, Nissan and Honda are all building new factories, while others are expected to announce plans or expand existing capacity.

A time for hope, a time for scepticism

The good news is that Brazil is making regulatory changes that could lead to more private infrastructure investment, particularly for ports. A new law passed earlier this year allows state-owned ports to grant concessions to private companies, which would be able to handle third party cargo and to use non-union staff. But the rules are complex and there have been legal challenges and labour disputes. Many at the conference were pessimistic about any immediate increase in private investment, at least for ro-ro operations.

“I’m sceptical about the port reforms and the impact for automotive,” said Tanibata. “I don’t see much government investment, and I don’t expect that many would be willing to take the risk to invest in private terminals for vehicles.

“I do see a good opportunity for container terminals, on the other hand,” he added.

There was nevertheless hope that at least things were starting to move in the right direction given the reforms. “The infrastructure gets worse and worse,” said Fiat’s Faria. “But maybe the government has been looking at it afresh in the past 12-15 months. Previously we couldn’t talk about private investment [in infrastructure], but we’re starting to see some movements.

“I don’t exaggerate the optimism,” he said, “but things are happening.”

Gustavo Bonini of Scania and Anfavea told delegates “discussing problems openly also motivates us to find solutions. I am very optimistic. It will take a huge effort in blood, sweat and tears, but we have to overcome custo Brasil.”

Visit the South America conference page for the speaker list and full report.