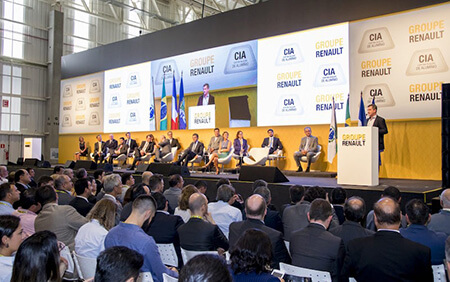 Brazil’s automotive sector now accounts for 22% of industrial GDP and 4% of GDP as a whole, the country’s industry, overseas trade and services minister, Marcos Jorge, has revealed. Directly and indirectly, it is responsible for 1.6m jobs.

“The Ministry of Development, Industry and Foreign Trade (MDIC) is committed to backing the industry with the opening up of international trade, as well as with the increase of both productivity and levels of innovation in Brazilian industry,” said the minister. "Exports to countries with whom we have agreements grew significantly last year, as was the case with Argentina, the main destination of our exports, where there was a 43% growth in sales. With the start of the automotive agreement with Colombia, we will be able to export 25,000 units there from this year onward.”

Jorge was speaking at the inauguration of the new aluminium injection plant Renault has built at São José dos Pinhais, in Paraná state (pictured). The plant is part of a 750m reais ($230m) investment announced last year that also includes expanding its engine plant.

At the inauguration ceremony, Olivier Murguet, president of Renault Latin America, revealed that 38% of the company’s production was now exported and that sales to Latin America were expected to increase by 10% in 2018. In the first two months of this year, sales were up 25%.

Exports from São José dos Pinhais grew by 26% in 2017, with the various plants in the city having overseas sales of $2.1 billion. Indeed, finished vehicles are now the second largest export of Paraná state, accounting for 10.9% of everything it sells abroad. Automotive imports to Paraná were worth $1.9 billion in 2017, resulting in a commercial surplus of $204m.

Cars represented 44% of total automotive exports from the state, followed by commercial vehicles at 13%. Auto parts and engines accounted for 12% of the value of exports.