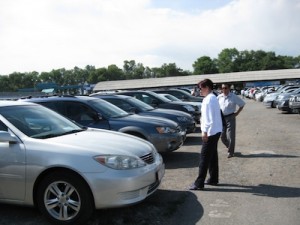 Automotive importers in Kyrgyzstan are urging the country’s government to cancel, or at least postpone, the introduction of a second round of levies on imported cars, which were brought in at the beginning of 2015. The first stage of the increase in duties, which are based on engine capacity, took place on September 1st, 2014.

As a result of the second round of increases, a number of vehicles have built up at the Kyrgyzstan border. Thousands of cars are currently stuck there as since the latest increase, their import has become unprofitable. In response, the Association of Automotive Suppliers (AAS) has sent a letter to the government asking it to delay the new duties until February 28th, 2015.

The AAS estimates that on average, import duties have increased threefold, with a large increase in particular on duties on second hand vehicle imports. “For example, the duty on cars with an engine of 2,000 cubic cm (ccm) before January 1st was $800, but now it reaches $6,500,” stated AAS spokesperson, Albert Kobonov. “This is a very large amount, especially given the fact that the average profit of automotive importers and dealers in Kyrgyzstan amounts to $1,000 per car.”

In response, the country’s Ministry of Economy has stated that importers were informed about the new duties in the middle of last year, adding therefore, there was no reason to postpone their introduction.

The Ministry’s head of trade policy, Taalaibek Bektashev, said any postponement now would send out the wrong signal. “If we postpone the introduction of the new custom tariff then other importers, not only of cars, will ask us for the same reprieves.”

As noted above, the first stage of the increase in duties took place in autumn 2014. For vehicles, it depends on the size of the engine and certain other characteristics. September’s increases meant that duties on passenger cars with petrol engines up to 3,000 ccm, and diesel engines up to 2,500 ccm, increased by $0.10 per ccm. At the same time, duties on cars with petrol engines more than 3,000 ccm, and diesel engines more than 2,500 ccm, increased by $0.15 per cubic cm.

Kyrgyz custom duties are growing under a plan being implemented to make sure the country meets the requirement it needs to join the Customs Union with Russia, which already includes Belarus and Kazakhstan. The plan demands that fees will rise each year until 2020.