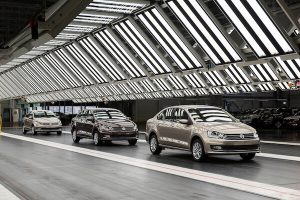 The cost of most new cars in Russia rose sharply in September in response to a mix of factors including the recent devaluation of the Russian rouble, the introduction of higher duties on imported components and an upcoming increase in taxation.

Research conducted by the Russian Gazette, the official publication of the Russian government, showed that 17 OEMs increased their price tags in the month, including VW, Toyota, Ford, Hyundai, Kia and Mitsubishi. The increases ranged from 5% to 12% across the most popular models.

Most industry experts believe there will be more to come, too.

Alexey Antonov, senior analyst at consultancy GK Alor, suggested there would be two further substantial increases – the first one, in early 2019, associated primarily with a forthcoming VAT hike; and the second falling in the second quarter of next year, at which point most assembly plants in the country will be running out of automotive components purchased at lower, subsidised rates.

The VAT hike, which will see the tax rate raised from 18% to 20%, does not appear hugely significant at first glance, said Antonov, but will push costs up right across the supply chain – not just for assembly plants but also for logistics providers, transport companies and dealerships. As a result, the effect will be quite widespread, he suggested.

Vladimir Bespalov, senior analyst at VTB Capital, told local news outlet Auto News that the devaluation of the Russian rouble had played a significant part in the September price hike. The value of the rouble slumped by nearly 10% in August, following a new wave of sanctions being threatened by the US, raising the cost of imported components purchased with hard currencies.

Beating further risesDespite the September increase, vehicle sales in Russia appear to be improving. Russia’s Association of European Business (AEB) estimated sales of new passenger cars and light trucks were up 6.2% in September, compared to the same month last year. That could be down to customers seeking to buy ahead of the price rises expected in 2019 – something vehicle dealers have been encouraging them to do.

Joerg Schreiber, chairman of the AEB Automobile Manufacturers Committee, said the association had revised its sales forecast for the full year from 1.75m finished vehicles to 1.8m “in view of current market conditions and the expected VAT increase from next January”.

The current rush to buy is likely to result in a subsequent slump in vehicle sales in early 2019, however, when the anticipated increase in prices as a result of the VAT hike takes effect, warned Bespalov.