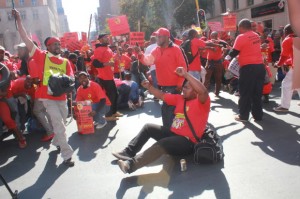 Renewed strike action affecting the car industry in South Africa has led one US carmaker to threaten to pull out of the country and move production to a region less prone to industrial action, the country’s largest engineering representative body has warned.

The Steel and Engineering Industries Federation of Southern Africa (Seifsa), which represents 2,200 companies, is currently locked in a wage dispute with the National Union of Metalworkers of South Africa (Numsa), which claims a membership of 232,000.

Although Seifsa does not represent the vehicle manufacturing industry it does include a number of critical component manufacturers as members.

In a statement, Seifsa CEO, Kaizer Nyatsumba, said that the head of a US-based carmaker had informed him that he was under “considerable pressure” from his head office to close operations down in South Africa and to move them to a country “with a more stable labour dispensation.”
South Africa has two US car makers with production facilities – Ford and GM. Nyatsumba did not specify to which company he was referring. However both companies issued statements denying they intended moving out of South Africa.

“This cannot be attributed to us,” said GMSA spokesperson Denise van Huyssteen. “GM has invested more than 1 billion rand ($93m) in production facilities this year. We intend to continue using South Africa as our base for expansion to the rest of Africa.”

Rella Bernardes, spokesperson for Ford South Africa, said its president and chief executive, Jeff Nemeth, denied making any such statement to Seifsa, according to a report in the Pretoria News newspaper.

Strike season
South Africa is currently in the midst of ‘strike season’, an annual event that occurs in sectors where wage negotiations have failed to reach conclusion. Although the strike will not directly affect motor manufacturing employees who concluded a bruising series of strikes of their own last year, workers at some suppliers and parts providers have downed tools. A similar situation hit the supplier industry in October last year following the action in August affecting carmakers.

However, a senior industry source said only 15 of the 1,000 or so suppliers was affected. “Although these represent some critical components such as axels and the like, manufacturers will have built up stocks to see them through the next few weeks.” He noted from the outset that the position of employers and Numsa were “polls apart” and that a strike had been inevitable. As a result, companies had built up stocks of affected components.

Should the strike not be resolved soon – and South Africa has a legacy of prolonged strikes, such as the recent marathon five month stoppage in the platinum mining sector – manufacturers will be struggle to continue full production.

Last year manufacturers were affected by three strikes – directly at vehicle assemblers, and indirectly by separate strikes at component manufacturers and in the logistics sector.

BMW, which operates a complete knockdown (CKD) vehicle production plant in Pretoria, said last year’s strike had cost South Africa the chance to produce a new model of the German marque. The company had lost 15% of its local production during the eight week strike.