Carmakers plan to relaunch deliveries in Crimea despite legal threat 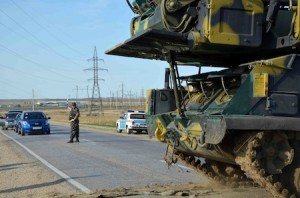 Russian automotive dealers have agreed with a number of carmakers to resume the supply of cars to Crimea despite promises from Ukraine authorities that any company or person conducting work with the annexed Russian region would be breaking the law.

According to the CEO of local automotive dealer Autodel, Michael Smolyanov, the Russian divisions of Renault-Nissan, Peugeot and BMW are planning to relaunch deliveries of vehicles to the region.

"So far we have successfully overcome [Ukraine’s] countermeasures with the four brands [and have] signed a contract with Nissan, Renault, Peugeot and BMW,” said Michael Smolyanov, adding that it expected other companies to join the list in the coming weeks, including Honda and Mitsubishi. “They will launch direct supplies and take on all logistic expenditure,” he said.

Last week Ukraine began preparing a lawsuit against several cruise liners and Turkish trade ships, which have continued to use the ports of Crimea. In the opinion of Ukrainian officials such cases are designed to act as an example to other companies interacting with a regime they see as in contravention of international law. However, this is no longer dissuading certain carmakers according to Smolyanov.

"These companies are not afraid of sanctions,” he said. “Clearly, they’ve taken this step due to the large presence of their brands [on the Peninsula]. Therefore, it was very profitable for them to agree.

Smolyanov went on to say that the delivery of cars to Crimea would be made through Russian importers and deliveries would be made by short-sea services from the Krasnodar Oblast.

Representatives of Renault-Nissan, Peugeot and BMW have refused to comment on the situation but anonymous sources from other carmakers previously active in the market have said that the prospect of launching supplies to Crimea in recent months has been ‘very attractive’. It is the less attractive prospect of sanctions that has curtailed them in their decision according to one source.

“The Ukraine authorities previously promised to take every company found to be conducting business with the Russian Crimea to court, or to implement trade sanctions against such companies, so the risk of establishing such supplies is quite high,” said a spokesperson from the Russian division of one foreign carmaker, who requested anonymity. “At the same time, the development of the situation now depends on the reaction of the Ukrainian authorities. If there are no any steps taken against carmakers that decide to return to the Peninsula, then we expect most other brands to establish supply of cars there by the end of the year.”

According to Roman Nikolaev, an expert at the Crimean-based analytical agency Sobytya, two other brands, Citroën and Geely, have already launched supplies to Crimea but have not announced it in media.

At the same time, a number of companies have stated that they will not re-establish volume supplies of vehicles to Crimea regardless of the move by their competitors. Representatives of the Russian divisions of Scania and Volvo, for example, have said that they have no plans to look for dealers in the Peninsula or carry out supplies to the local market.