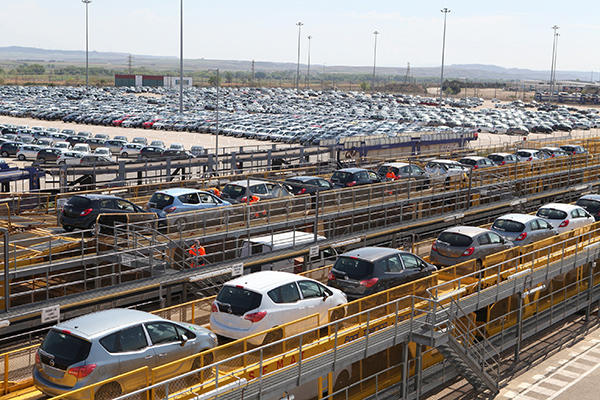 Spain’s national ports authority, Puertos del Estado, has committed €40m ($42.6m) to upgrade the railway line linking Zaragoza, Teruel and the port of Sagunto on the Mediterranean coast. Of this, €13.6m is earmarked for sidings and €23m for the rail access into the port.

The government said that it wanted to reinforce the Zaragoza-Sagunto line, which it viewed as “strategic infrastructure for the transport of freight”. It said the investment was based on the “spectacular growth that ports in the Levante are undergoing and the capacity that the cities of Zaragoza and Teruel have to establish themselves as port hinterland”.

The comments were made by the economic development minister, Iñigo de la Serna, during a presentation of the government’s Port Accessibility Investment Plan for the 2017-2021 period.

In terms of Spain’s automotive industry, the Zaragoza-Sagunto link has the potential to see major movements of finished vehicles from production plants in the north of the country to both the Sagunto port outlet and Valencia port on the Mediterranean coast.

GM has already begun trials on the line. In 2015, it sent consignments of finished vehicles from its manufacturing plant at Figueruelas, in the north of Spain, to the port of Valencia.

At that time, the line was in a poor state of repair, meaning that both line speeds and capacity were constrained. The aim of the trials was to see whether it would be more profitable to make use of the Teruel line, rather than sending trains via Tarragona, which is what usually happens.

By rerouting trains via Teruel, the overall journey is cut by 300km.

The trial consisted of one weekly train conveying Opel cars to Valencia, which lies just to the south of Sagunto, a port which has subsequently boosted its own finished vehicles business given capacity constraints at Valencia, where Ford also recently announced plans to expand its own operations.

Back in 2014, it was suggested that to bring the Teruel line up to acceptable standards, which would include electrification, would cost almost €223m. This would facilitate faster speeds and allow trains of up to 750 metres in length to run. In its degraded state, the Teruel line limited freight trains to average speeds of 28kph, with trailing loads no longer than 550 metres.

However, the trial remained just that, with trains withdrawn shortly afterwards and no immediate plans for their reintroduction unless major renovation of the line went ahead.

In his most recent announcement, minister Serna cited three concrete measures that will be now be implemented, with finance sourced from the Terrestrial Port Access Fund. These will be the development of rail access to Sagunto port, the construction of 750-metre sidings, and the partial renovation of the line. For 2017, €4m will be available for work on sidings and €1m for port access work.

José Llorca, president of Puertos del Estado, said that in addition to the pledged €40m, there could also be more money available when a more concrete project was presented.

Sagunto port access work will also receive €23m from the Terrestrial Port Access Fund and a further €11.5m from other funding bodies.