The Warehouse Excellence model is applied in China to ensure Bosch’s supply chain is fast and flexible enough to meet a very different type of demand to that in Europe.

A compelling case for the potential of improving warehouse performance with lean management can be found at Bosch Automotive Diesel Systems in China, where an internal facility has seen its productivity increase dramatically. The case is notable not only for showing what can be achieved with a lean focus, but also because warehousing plays a critical role in meeting the demanding needs of China’s supply chain, and will become even more important in future.

Bosch Automotive Diesel Systems is a joint venture with China’s Weifu Group that began in 2004. It has an integrated plant, engineering, sales and logistics campus in Wuxi, some 130km west of Shanghai. The company has around 4,200 employees. According to Dr. Hans-Henning Töpper, vice-president, the company builds the main portion of its output for the Chinese market.

“We are not a low-cost centre to feed Europe with cheap technical solutions,” he says. “We are a high-tech location fulfilling the high-tech standards for passenger and commercial vehicles in China. Currently, we are working on Euro 6 engine applications, for example.”

Töpper says one of the most fundamental drivers of the company’s strategy is the need for an extremely fast and flexible supply chain – much more so than even in Europe. As the market in China is very volatile, Bosch receives only a short period of fixed orders and fluctuations of orders from month to month can be high. The reason, explains Töpper, is that many of its customers are engine producers rather than vehicle producers. As trucks in China are typically designed to use different engine types, the variability and competition between engine manufacturers is extreme.

This is a completely different supply chain to what a Bosch diesel plant in Germany might encounter, where order and forecasts typically stretch out nine months and plants run with volume deviation of 3-5%.

Such flexible production cannot depend too much on the three months it takes for import order-to-delivery cycles. To that end, Diesel Systems has localised much of its supply chain. The main components of its common rail system, including high-pressure pumps, electronic control units, distribution rails and injectors are built in China. For this core business, around 85% of suppliers are in China, some of which deliver to the plant up to six times per day. Suppliers further away, such as those in Guangzhou, are collected by milkruns once per week. 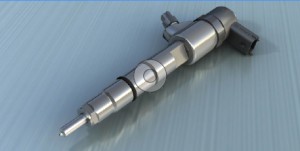 However, there are still some applications that use specific pumps built in Europe, along with a number of other products. The total share of imported material is thus still on a medium-level, says Töpper.

The company uses its own internal forecasts to plan imports based on customer forecasts, but warehousing is essential. “Our operations are very complex and involve trucking goods as far as 5-7 days to customers. It is as though you would supply a customer in Lapland from a plant in Sicily, with supermarkets and kanban in between.” Töpper says. “To drill down your inventory, you need speedy production and supply chain flexibility,” he adds. “If you don’t have the right processes in the warehouses, you will always end up with the wrong part somewhere.”

The 5,000 sq.m Wuxi warehouse is equipped with high rack shelving for 2,500 pallets along with low racks for KLTs (small boxes). It handles goods receiving and preparation for milkruns, along with final packaging, picking and dispatching. There are around 100 hourly workers across three shifts.

Töpper says that while the warehouse always ran effectively, the company had no clear idea what its defined standards were, including its ideal headcount and KPIs for specific tasks. After reviewing Bosch’s Warehouse Excellence project, he decided that Diesel Systems in Wuxi should implement the same approach, beginning with a value-stream mapping of all operations.

“First it was necessary to visualise the process since nobody was able to describe how the warehouse really worked,” he says. “We did a lot of methods-time measurements, recording every single step and operation in the warehouse. From this we started to do process optimisations.”

The power of lean precision

It was also necessary to be more precise in KPIs than some of what the Bosch Production System (BPS) typically calls for. For example, one guideline in BPS is for productivity to be measured by pallets per day, calculated according to man-hours in the goods receiving area, but the measurement was useless in China, says Töpper. Material coming from a Bosch plant in Germany might be packed efficiently and is easy to unload, but local Chinese packaging might take ten times more effort.

What was needed was to drill down and measure the process for each type of packaging material and product. For example, a pallet of rails received from Bosch production could be packed in five minutes, while pump housing needed about one hour per pallet. These times were then multiplied by daily frequency to measure workloads more accurately. Only then could Bosch define processes to improve or decrease the loading times.

“This was a huge workload, but now that we have this dedicated information we can calculate and measure productivity very accurately,” says Töpper.

By understanding its processes so precisely and targeting improvements, Töpper says the company has achieved good results in productivity increases, which are necessary to balance the cost and salary increases in China,.

Bosch Automotive Diesel Systems has two other external distribution warehouses, which Töpper admits should be a future focus for ‘lean’. Both operations meet Bosch standards for cost and efficiency, but the company’s efforts to define its processes should help it measure providers’ operations in more detail.

"To drill down your inventory, you need speedy production and supply chain flexibility. If you don’t have the right processes in the warehouses, you will always end up with the wrong part somewhere"
- Dr. Hans-Henning Töpper, Bosch Automotive Diesel Systems

Warehousing looks set to become more important for the company as Töpper explains that in China it is common for Bosch’s customers to order material on consignment or on ‘delivered not invoiced’ terms; a manufacturer receives material and only allow suppliers to issue invoices until after it uses the products for assembly. This transfers the risk of production fluctuations to suppliers like Bosch and does not allow the supplier to maintain control of the appropriate storage conditions of the material. However, many of the consignment warehouses storing such material are “far from Bosch standards”.

According to Töpper, Diesel Systems prefers to meet the flexibility in demand by setting up regional distribution centres across China for its largest customers. These warehouses, which will be outsourced to providers, could be multi-user hubs, set up in combination with other Bosch entities in China or dedicated to one customer. “Our target is to set up a supermarket or dedicated finished goods inventory, then to have a daily truck or shift-based delivery to the customer,” says Töpper.

Bosch has already improved its transport network by bundling more material from its many subsidiaries across China. Plans for a second Diesel Systems plant in the north of China will also offer faster delivery options, but the lean approaches already applied in Wuxi are likely to benefit the wider supply chain as well as new locations.