Most of the Indian passenger vehicle and two-wheeler carrier fleet is technically illegal, thanks to out-dated regulations, conflicting state laws, and a growing gap between industry practice and the law. However, the government may be close to deciding a new standard.

The Indian trucking sector, including carriers for passenger vehicles and two-wheelers, has struggled of late through both a weak economy, as well as a regulatory limbo. In particular, manufacturers, logistics providers and trailer fabricators have been caught between accepted norms in the industry, differing state laws, and an unclear policy from the federal level. As a result, a number of carriers and trailer fabricators have hit financial troubles.

Part of the issue is India’s out-dated Central Motor Vehicle Regulations (CMVR). By these measures, any car carrier longer than 18 metres is technically illegal, a length almost universally surpassed by vehicle carriers on the road. While executives at logistics providers generally accept 18.75 metres as a useable standard, it has become almost ubiquitous to use longer trucks up to around 22 metres with different drawback varieties.

The prevalence of the longer length now appears so widespread that one foreign car carrier builder at the Automotive Logistics India conference last December admitted that it hardly sold any trailers for four years until it finally started building the 22-metre equipment that is technically illegal. “Now we have plenty of orders,” he said.

Vipul Nanda, president of the Car Carrier Association, which represents passenger car carriers, estimates that India has around 12,000 car carriers, of which around 75% are 22 metres, and most of the rest 18.75 metres. To get around the issue, logistics providers either pay regular penalties – which can cost up to 15% of operating costs, says Nanda – and factor them into costs. In some states, such as Haryana, north of Delhi, local authorities have granted Fitness Certificates (FC) to individual trailers each year, allowing the non-standard trucks on its roads. However, that practice has recently ended, increasing risks of delivery disruption to the vehicle logistics sector.

The issue is not specific to the vehicle logistics sector. Rules and practice also vary for the movement of consumer products such as white goods and motorcycles. A huge portion of the 60,000 carriers for such equipment violates standards, according to Daman Dewan, general secretary of the Automobile Carrier Welfare Association, which represents such carriers.

Part of the problem here is that the CMVR is less specific on trucks for two-wheelers and white goods, says Dewan, leaving carriers caught between state laws, which may leave equipment technically longer, wider and higher than the law allows.

"Every state has its own law. For example, the Maharashtra government says that double-decker transport is for buses, not for car carriers. There is no uniform law across the country"
- Daman Dewan, Automobile Carrier Welfare Association

“Our legal advisors have gone through this act thoroughly. There is no specification for these trucks,” he says. “[The state of] Haryana’s Transport Commissioner, Ashok Khemka, told us that there is a common platform for the trucks carrying cars as well as two-wheelers and we have to follow specifications under that category.”

In that case, two-wheeler carriers would be constrained, since the 4.75-metre height limit for such equipment would not allow for triple-decker trucks that are sometimes used to move two-wheelers. In other states, even double-deckers – which make up the majority of two-wheeler carriers – are allowed only for buses.

Every state has its own law. For example, the Maharashtra government says that double-decker transport is for buses, not for car carriers. There is no uniform law across the country,” he says.

According to Dewan, white goods and two-wheeler carriers would be glad to see width extended to 3 metres, although they would also be satisfied with 2.85 metres. “The carrying capacity with 2.85-meter width will be 50 vehicles,” he says. “Normally we use a double-axle truck which carries 78 bikes, which we extend basically 7-8 feet more than the original chassis so that we carry 12 more vehicles.”

This dimension, he says, has low accident rates and insurance costs.

For car carriers, the CMVR’s length limit of 18 metres is impossible, according to Vipul Nanda “The [vehicle carrier] industry cannot sustain the 18 meter rule,” he says. “It has to be 18.75 meters so that more small cars, or six sedans, can be loaded. In an 18-meter vehicle, it would be difficult to load anything beyond five. Even the [lowest] European standards stipulate 18.75 meters.”

There are signs that the 18.75 length will be adapted as part of a new road safety law the government plans on bringing in. Speaking at the recent Automotive Logistics conference, Sanjay Bandopadhyaya, from the Ministry of Road Transport, indicated the government’s preference was for the “European standard” car carrier length of 18.75 metres (although many EU member states actually allow longer trucks or overhang).

“We will issue a draft of goods carriers; the regulation it will adapt will be European regulations, not more than that. The larger carriers should not be allowed,” said Bandopadhyaya. 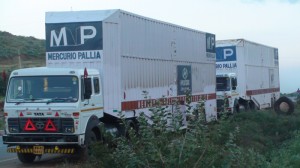 That would leave the majority of carriers, at 22 metres, illegal. That is no different to how they are today, but the new law is expected to carry stricter enforcement and consequences for those that use illegal equipment.

The industry recently had a glimpse of where it might be heading in Haryana, when last December the state ceased to issue or renew FCs for trucks, while also issuing penalties for non-standard trucks registered in other states. This move had a huge impact, especially as the state is home to the headquarters and several plants of the country’s largest carmaker, Maruti Suzuki, and largest two-wheeler brand, Hero Motocorp.

Executives at carmakers and logistics providers negotiated hard with the state government’s transport department to strike a deal. Under a new dispensation, the Haryana government has agreed to a one-year extension to all vehicles waiting for an FC, while each operator has to provide a Rs.200,000 ($3,200) surety bond as assurance they will comply with the prevailing CMVR when the current spell of ‘benevolence’ ends. Carriers appear to have bought time, rather than certainty.

Nanda believes that having an accepted legal standard would eventually help the industry even more than a 22 metre-long standard would, so long as everyone, including OEMs, followed the rules. “We have written to the government that all these so-called anomalies exist because rules are not clear. We told them, ‘Tell us what the rules are and we will follow,'” he says.

“Everybody will have to discipline themselves including OEMs. We do not want to ask for another extension in the next year. No more dilly-dallying. This issue has to be closed once and for all.”

The dilly-dallying may finally be ending, after all. At the end of January, India’s Transport Ministry set up a new committee charged with recommending standards for carrier lengths. It is scheduled to deliver its findings within the next two months. Included on the committee are both the International Centre for Automotive Technology Delhi and the Indian Institute of Technology.

A decision will be welcome to many in the sector, although some are undoubtedly nervous over whether their fleets will be rendered obsolete or in need of expensive conversions.

Should the government go for the 18.75-metre standard, freight costs will invariably go up, says Nanda, since trucks would carry fewer vehicles than a 22-metre truck. Similarly, a narrower, shorter standard for carrying bikes would also limit capacity, potentially adding to driver shortages as well.

“It would, however, be good for chassis and body builders because they will have more chassis to sell as many will be scrapped, replaced and altered,” says Nanda, whose company, Mercurio Pallia, has also been involved in trailer manufacture.

The Automobile Carrier Welfare Association estimates the cost of changing the length and width per two-wheeler truck at around Rs.250,000 ($4,000). “The whole truck has to be dismantled and made again,” Dewan says.

Although there would be freight and conversion costs, Nanda also points to efficiencies that would come from the 18.75-metre standard. Firstly, it is the preferred length for truck drivers, and would encourage them to cover more mileage. Secondly, any accepted and established standard would eliminate the price and time associated with penalties for the use of non-standard trucks, which are currently “huge”, he says.

“There are no limits [to the fines.] Authorities charge anything they want,” he says. “Recently, there were 50 vehicles that were held up in Haryana and they were challaned [fined] Rs.15,000 each. In Uttar Pradesh, this penalty can go up to Rs.42,000-45,000 per vehicle. Once the new CMVR norms are in place, this [cost] may go away.”

According to Nanda, Maruti Suzuki appears to already anticipate a ruling on 18.75 metres, incentivising carriers to use this standard with a rate that makes using this equipment pay similarly to a 22-metre truck. The carmaker does not want to put the movement of its vehicles at risk, he says. “Even today the trailers running specifically for Maruti are 18.75 meters and I think it is a good initiative taken by them,” says Nanda.

Although Nanda anticipates it might take some time for states to adapt to a federal standard, they would all eventually have to follow a central law. “The revised CMVR would definitely help transporters to leave a good and legal business for our next generation,” he concludes.