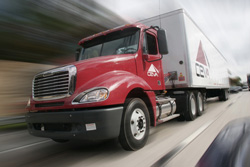 Third party logistics provider Ceva has reported a small drop in revenue and profits for the second quarter of 2013 compared to 2012, although the company’s chief financial officer said the company was “very satisfied” that it had found stability following a recapitalisation this past May. The company also pointed to strong results in parts of the automotive sector, and at least signs that the sector in Europe was bottoming out.

Ceva, which since its restructuring and ownership changes reports its results as Ceva Holdings LLC rather than Ceva Group PLC, and in US dollars rather than euros, saw revenue decline by 6.2% to nearly $2.15 billion in the second quarter. Earnings before interest, tax, depreciation and amortisation (Ebitda), and excluding restructuring costs, were down 2.4% to $80m.

The decline was felt more strongly in the company’s freight management arm, which includes air and ocean freight forwarding, with a drop of 11.7% compared to 2012. Adjusted Ebitda for the freight business this quarter was down 43.6%. Contract logistics performed better, with a drop a 1.4%, attributed to the still-weak European market as well as from the termination of some contracts as part of a cost-reduction programme. A number of those contracts were in the automotive sector, said CFO Ruben McDougal.

But the underlying contract logistics business was strong, with Ebitda up 34.9%, supported by better margins in North and South America, along with strong automotive performance in those regions and China, Mcdougal told Automotive Logistics.

McDougal said that the company was “very satisfied” with the results, particularly in light of its debt restructuring and recapitalisation, which included a cash injection by its primary shareholders and a conversion of debt into equity. “We think that the results are particularly remarkable considering that we made a lot of noise during the last quarter during our recapitalisation,” McDougal said.

According to McDougal, the reduction in debt and interest payments, together with a continuing cost cutting drive, had contributed to the company’s stronger balance sheet. He said that most of Ceva’s customers were now reassured that the company’s financial health was sound, although he acknowledged that some had voiced concern during its restructuring. He also admitted that Ceva had made a number of senior personnel changes and that “more were likely,” although he was not more specific. He added that the business’s operational management has and would remain consistent.

Automotive has been playing a “very significant” role in Ceva’s stable contract logistics business, led notably the strong growth in North America and the company’s joint venture in China, according to McDougal. While business in southern Europe continues to decline, he pointed to strength in northern European markets, including the UK. “I don’t think I’ve heard anyone use the words ‘green shoots’ yet to describe business in Europe, but our business operations on the ground there do suggest that we are at the bottom,” he told Automotive Logistics.

McDougal said that Ceva expects business to continue to improve over the rest of the year, including for the North American automotive sector and other emerging markets. He said, however, that the company was unlikely to make any big entries into new emerging markets, such as Indonesia.

“We’re going to focus on the big opportunities that we think we have in markets where we’re already established,” he said.