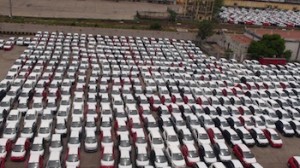 In India, the port of Chennai has become the first in the south of the country to receive automotive traffic moved by a rake of New Modified Goods (NMG) car transporters operated by Indian Railways. NMGs are single-decker auto carriers that have been built from old ICF and BEML passenger rail coaches.

In total, 118 Hyundai cars arrived at the port in 24 wagons. These were offloaded at the vehicle yard close to Ambedkar dock in around 2.5 hours. They were then loaded on the MV Glovis Supreme for onward movement to ports in southern Africa.

According to the port trust chairman, Atulya Misra, the use of rail to deliver new vehicles to the port makes for easier vehicle handling, which could not only lead to the de-congestion of roads but also to a reduction in carbon emissions. This should also give a boost to automotive manufacturers at the Sriperumbudur hub, he added.

Although the design of NMGs is not totally uniform, the conversion has resulted in all doors and windows being welded shut and a new end door inserted to allow vehicles to be driven straight into the ex-passenger compartment. In their standard layout, NMG wagons can accommodate up to five cars, with the normal rake loading to 125 units across 22-23 ex-coaches.