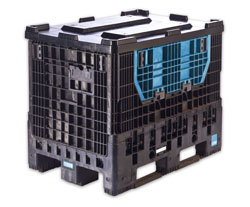 Packaging-pooling provider Chep has added a foldable large container (FLC) sized for the European automotive market to its fleet of returnable equipment.

The container, called FLC 1208, is based on the standard 1,200 x 800mm size of European pallets, which is currently used in the majority of warehousing and transport logistics systems in the region, according to the company. The container, which has a load capacity of 500kg, features foldable openings on both the short and long sides that Chep said would improve loading operations on assembly lines.

Chep added that the equipment would benefit transport efficiency as it can be stacked three high, and is also lighter compared to traditional steel mesh boxes.

Chep currently offers a variety of container and pallet-pooling services, including the planning, control and monitoring of packaging movements. The uptake of third party services for pooling packaging assets in the automotive industry varies widely in different regions, with currently lower levels of outsourcing in North America and some emerging markets compared to Europe. A recent feature in Automotive Logistics revealed that the uptake tends to be higher where there are common standards, such as the Euro-size pallet.