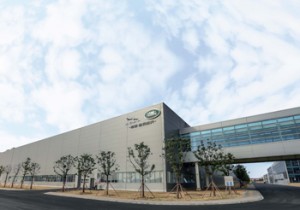 As Chery Jaguar Land Rover (CJLR) launches series production of the Range Rover Evoque in China, the joint venture carmaker is putting into action a complex and global supply chain that its logistics team has been planning for nearly three years, including the use of a diverse set of lead logistics providers (LLP) for inbound, in-plant and vehicle logistics. The providers working with the company include Chinese freight forwarder Sinotrans and Anj-Ceva for inbound, and Changjiu Logistics and NYK Automotive Logistics for outbound.

The Changshu plant, north of Shanghai, was officially opened in October and is ramping up production through December, according to Rui (Richard) Zhu, director of material planning and logistics (MP&L). Higher volume output starts in January, after the Range Rover Evoque (known as the Aurora in China) was launched at the Guangzhou motor show at the end of November. Vehicles will hit dealer showrooms before the Spring Festival holiday in the middle of February.

Another two models are already planned for Changshu, including a Land Rover SUV and a Jaguar sedan. At its current capacity, Changshu can build 130,000 vehicles per year.

Mapping the global supply chain
For logistics, the outsourcing makeup is notable for its diversity, including the use of multiple LLPs and third party providers for international, inbound and in-plant logistics. Unlike other joint venture carmakers in China, in which an incumbent provider owned by the Chinese OEM tends to have principal responsibility for logistics, CJLR has contracted directly with domestic Chinese, joint venture and foreign providers across the chain.

As previously reported, CJLR has divided its inbound supply chain between two LLPs. Rui has further revealed that European material is handled by Sinotrans, while Anji-Ceva, a joint venture between SAIC Motor’s Anji and Ceva Logistics, is responsible for domestic supplier deliveries, warehousing and in-plant logistics.

For international supply, DHL Supply Chain, JLR’s lead provider in Europe, collects and consolidates European material together with UK-bound material, delivering it to an Export Sales Centre in Hams Hall, near Birmingham. According to CJLR senior manager for MP&L, Alex Holland, logistics provider Syncreon runs this centre, with responsibility for packing and consolidating the material into sea and air freight shipments. Material is then handed over to Sinotrans for onward transport to China up to the gate of a deconsolidation centre just over the road from the plant’s receiving dock in Changshu.

This is the second significant contract that Syncreon has gained recently with JLR, as it is now also running in-plant logistics at the carmaker’s new engine factory in Wolverhampton.

The normal mode of transport from Europe to the CJLR plant is by sea and then inland barge. Material moves from the port of Felixstowe to the port of Shanghai, where Sinotrans transfers containers for temporary storage before an onward journey of some 80km along the Yangtze River to the inland port of Changshu – a transit time of about a day – before material moves by truck to the plant. 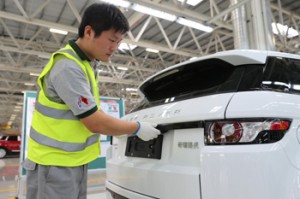 responsibility. The centre includes three warehouses for imported material, domestic inbound and spare parts; there is also space dedicated to empty returnable packaging for domestic suppliers. Anji-Ceva manages the warehouses along with the domestic milkruns and empty returns for local suppliers.

Heavy traffic, careful routing
According to Rui, CJLR expects the deconsolidation centre to receive around 105 trucks each day as production starts in earnest in 2015, rising to 130 the next year. Once material is unpacked and sorted for plant docks, Anji-Ceva is expected to move around 150 trucks per day next year over the road from the warehouses to the plant gates, and 180 the year after.

While imported material is high, at least in the initial production phase for models in Changshu, supplies such as seats, windows and wire harnesses have already been localised. Most of the domestic material will arrive by milkrun, which will run at “full scale”, said Rui.

Direct deliveries to the plant are mainly for just-in-sequence material moved to the line by conveyors, such as seats, bumpers, tailgates, wheels and tyres. “The truck volume to the plant is big, and there is going to be a lot of traffic for internal movements as well,” said Rui. “For that reason we are planning routes carefully with our LLP and trying to avoid having too many direct deliveries separate to what comes via the warehouses.”

As previously reported, CJLR has opted to use the same LLP for inbound deliveries and in-plant logistics operations, and so Anji-Ceva is also the on-site supplier for the plant docks, its large supermarket and kitting area, and line-side material feed.

For vehicle distribution, Changjiu is responsible for around 75% of vehicles, while NYK Automotive Logistics China will handle the rest. “Most of the major players joined our tender, including the large local providers and western companies,” said Rui. “We chose Changjiu, which is the second largest player in outbound after Anji in China. NYK is also very famous in this area.”

Outbound logistics in China can be messy, especially with the much-reported use of oversized and non-standard trucks carrying as many as 25-30 vehicles. For CJLR, however, maintaining its premium image is paramount; there can be no question of sanctioning the use of illegal trailers.

“We are insisting on legal trucks for both inbound and outbound logistics,” said Alex Holland. “As the first international factory for JLR, we have to make sure that the delivered quality is every bit as good as that from the UK. We are not going to compromise our brands by using illegal and dangerous trucks.”

According to Rui, CJLR worked with JLR’s UK management to audit and bid for providers, train the local team, and adopt global standards, including protection products. CJLR’s technical requirements allow standard, covered trucks that carry no more than 8-10 cars, and Rui expects providers to follow what they agreed to.

“The quotations providers made were based on our technical requirement, so there should be no reason to deviate from them,” Rui said. “The carriers have signed contracts, and are expected to deliver at that quality level. Anything else would be in violation of our agreement.”

Not all trucks have to be new, said Rui, however they do need to be dedicated to the carmaker. NYK is also a provider for JLR China, the national sales company, transporting imported vehicles from ports. “We are okay with locally built cars being combined on trucks with imported JLR vehicles,” said Rui. “However, we don’t allow the companies to mix our vehicles with other brands.”

The first steps, and beyond
Even as CJLR prepares for full launch, Rui and Holland are looking toward the next phase of improvement in the logistics chain. One example is the opening of export channels that can move material directly to China rather than being consolidated in the UK, for example. With JLR, the company is establishing an export centre in Germany, from which material from mainland Europe based suppliers can be shipped.

“In this way, the joint venture takes on more responsibility, can avoid double handling and reduce lead times,” Rui said.

Alex Holland said that the company is also watching the development of rail services in China, including from Europe across the Trans-Siberian Railway, which a number of companies are now offering. “We are also starting to hear more about the possibility of linking the rail closer to Shanghai, and not just to the north or far west of the country,” Holland said. “In the future, this could be interesting for us.”

However, the most important step is the first still ahead, as CJLR must prove that its system works. “The next step for us is to really put the supply chain and providers to the test, including the international flows, the domestic milkruns and in-plant materiel flows,” said Holland. “For outbound, our providers will face a strong push to get everything to dealers ahead of the Spring Festival. It will be a challenge, but we are confident we will succeed.”